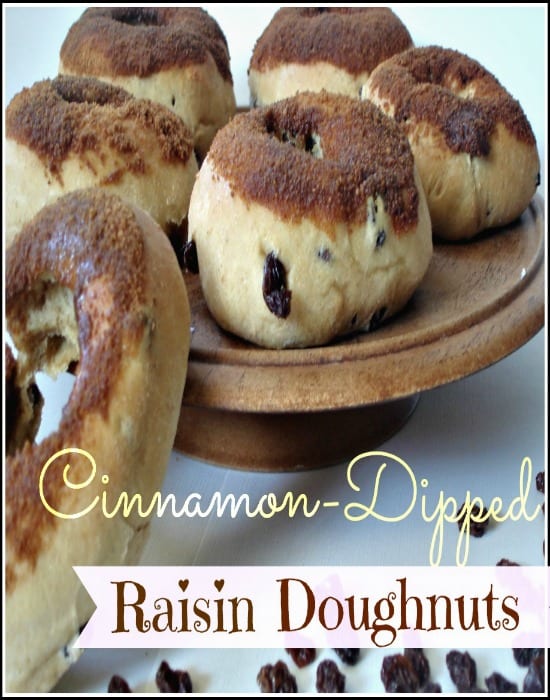 Remember those doughnuts you had from your childhood? ‘You know what I’m talking about– the ones that were fried in huge pots of oil and then covered every inch with either cinnamon-sugar or a sugar icing. 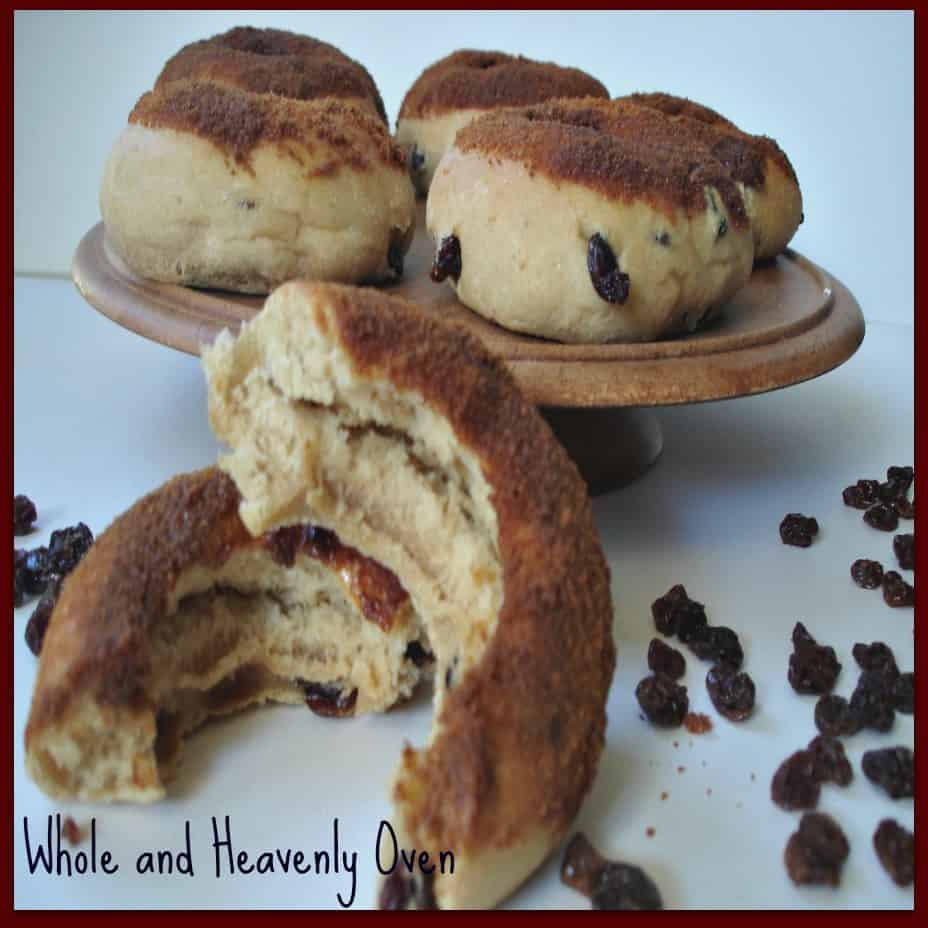 Answer yes to all these questions. I’m betting almost everyone has had a 900-calorie doughnut at some point of their life.

What I’m bringing you today is just a little something I like to call Perfection. Without the frying and without those extra 900 calories 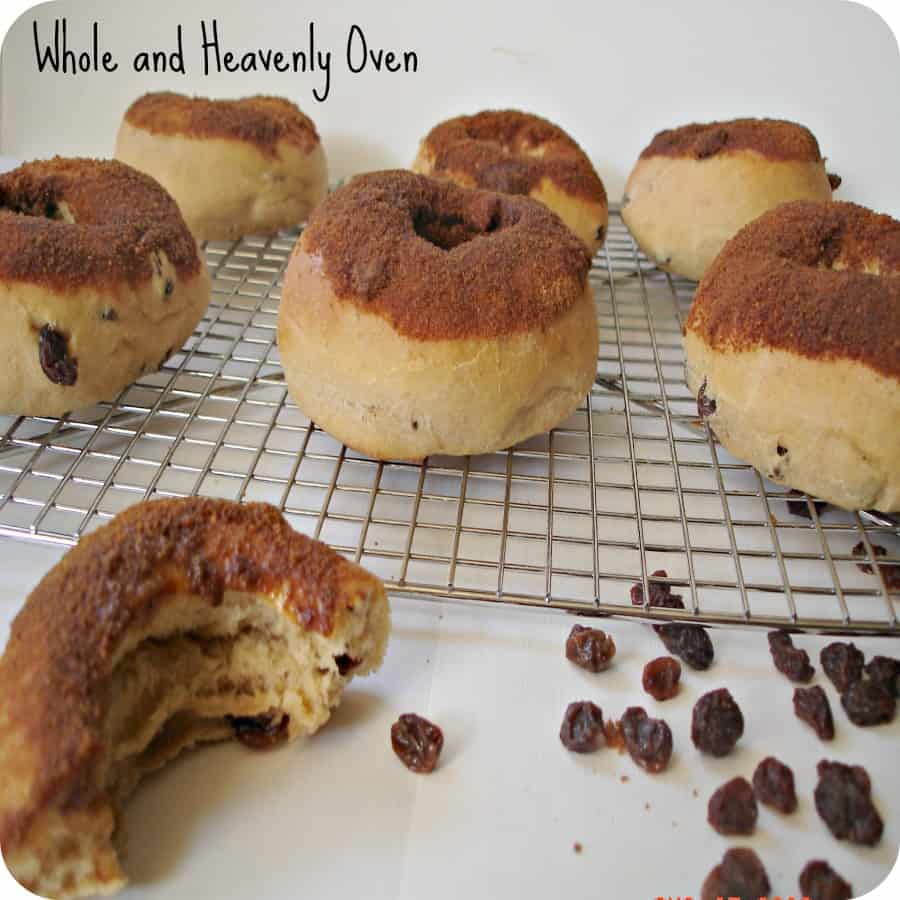 Is it too early to start thinking about pumpkin cheesecakes, apple pies, and cinnamon-covered everything? 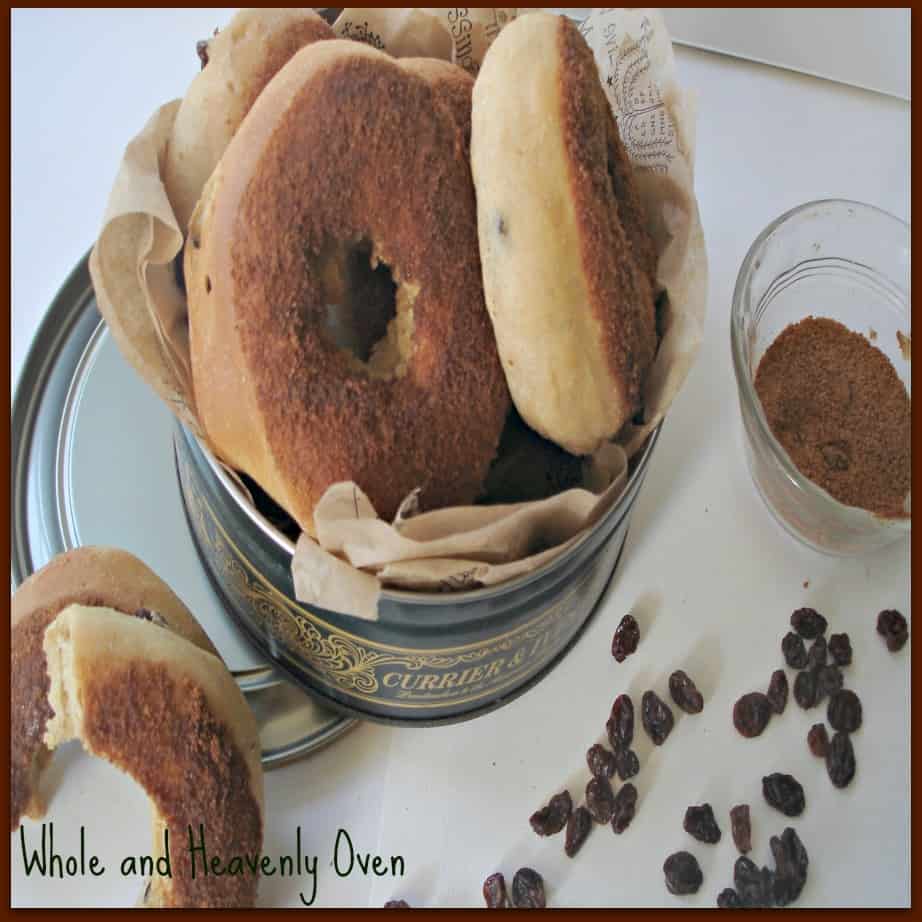 Including these little gems. 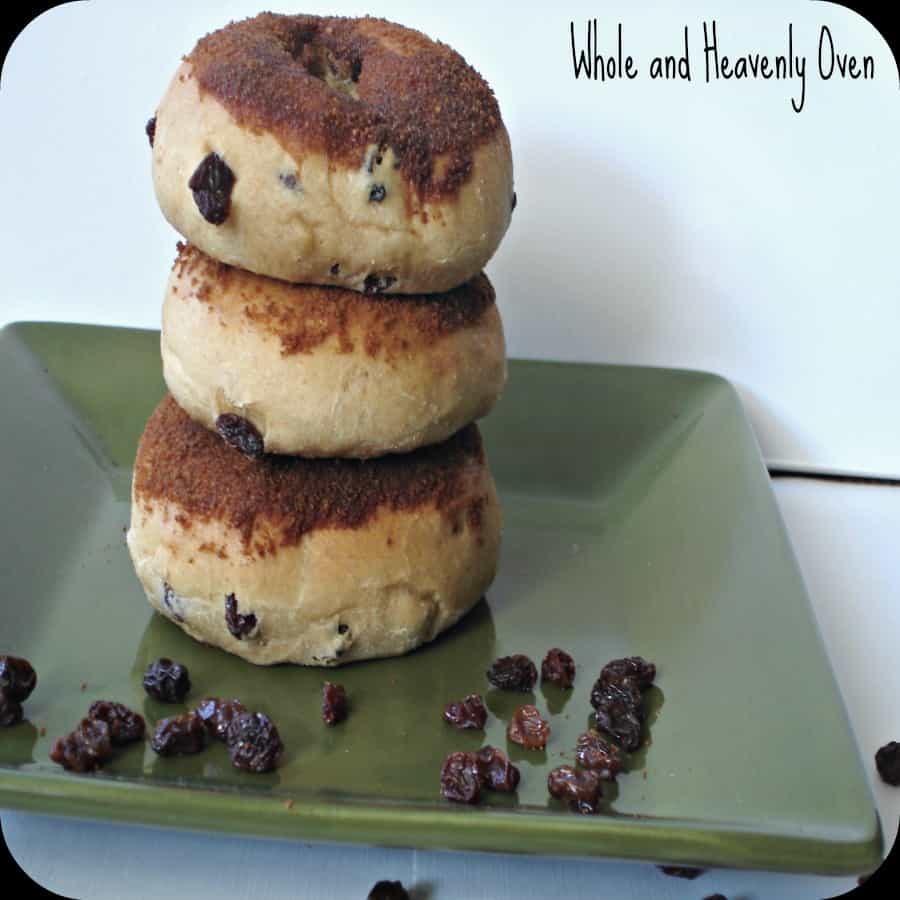 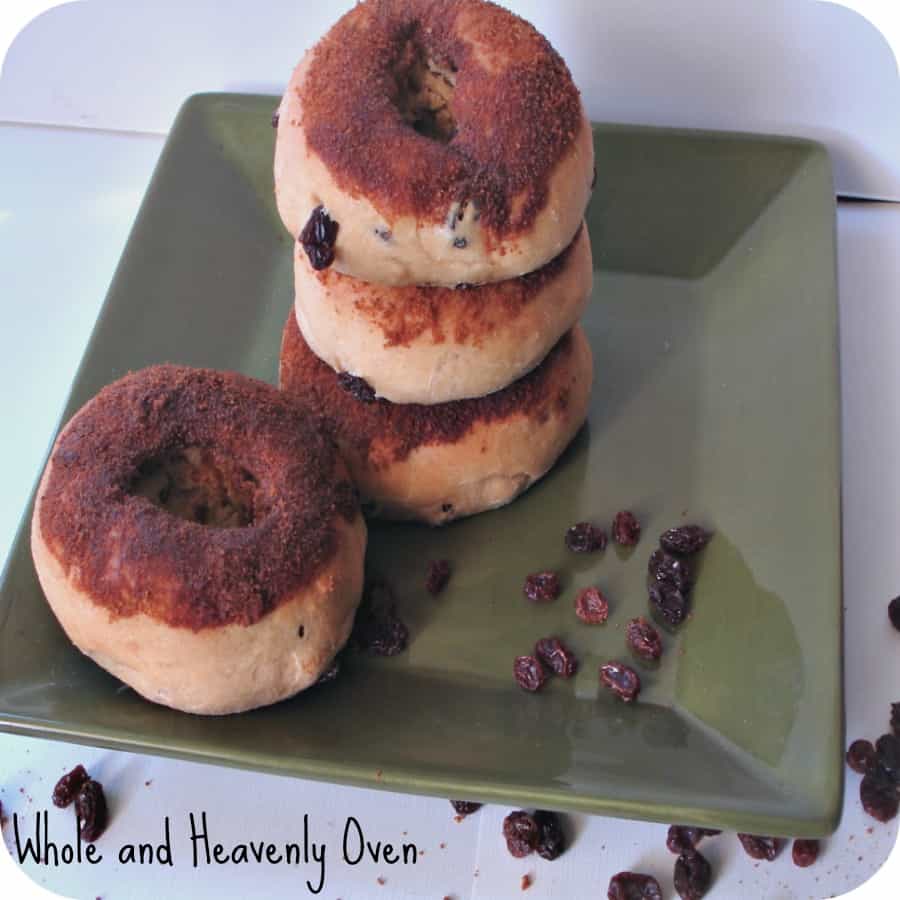 No kidding, these doughnuts really are gems. Actually they’re big honking diamonds if you ask me. 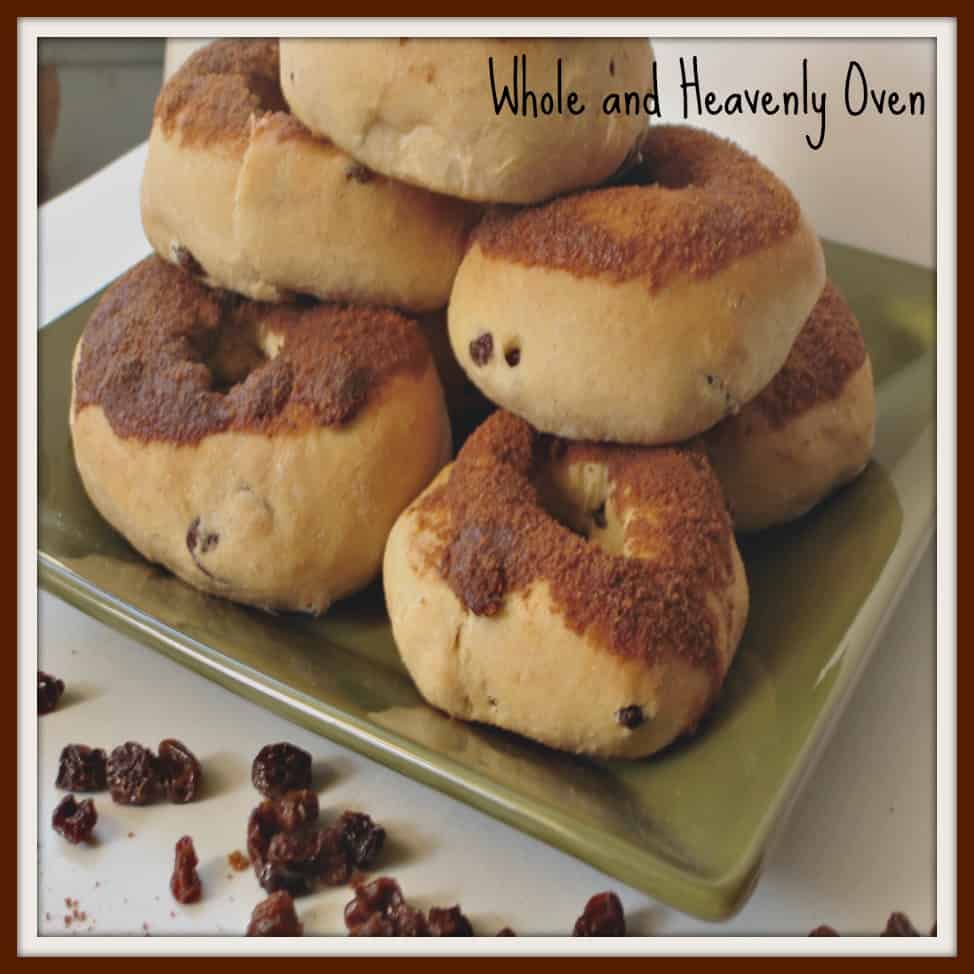 Yumm. Yeast doughnuts really are the bomb. Even better with cinnamon and raisins, which is one of my all-time favorite food combos. ♥♥♥

As if the un-cinnamonfied (ha-new word!) doughnuts weren’t enough on their own…Soft and moist with plump raisins in every bite…When they’re dipped in (a small amount!) of melted butter and then coated in crunchy cinnamon/coconut sugar… *swoon* they become purely epic. 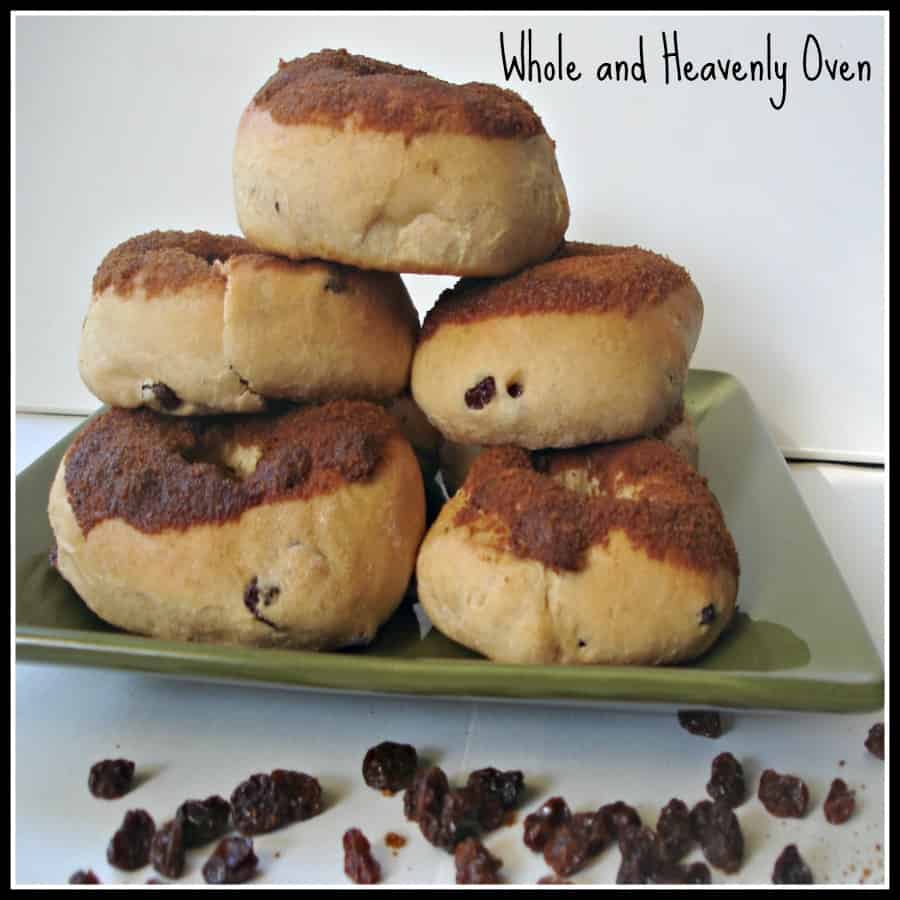 You will never go back to Dunkin’ Donuts again after one bite of these. The smell of them baking is incredible–they make your entire kitchen smell like a doughnut factory 😀 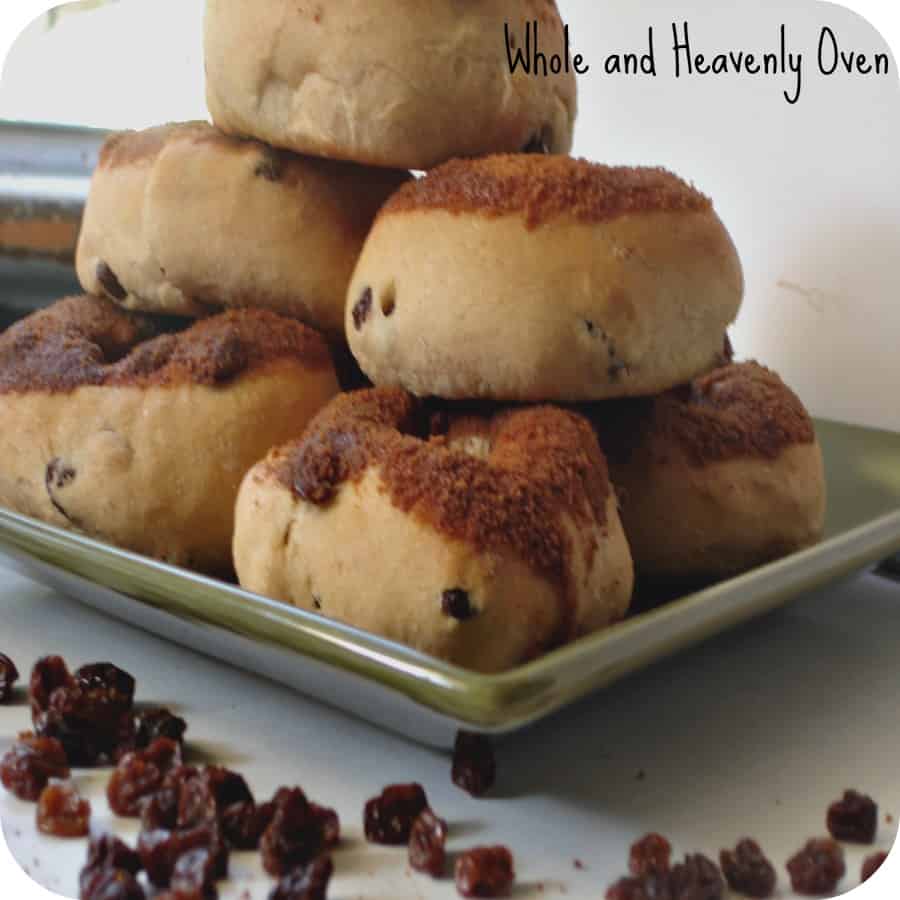 The entire process, from the beginning to when you’re sitting down munching on doughnuts, takes 1-1/2 hours. Time well spent, I must say.

The longest part is waiting for the rising. These are yeast doughnuts and they are obviously going to need rise time.

You’re just gonna proof the yeast in the warm milk and let it sit 5 minutes, just to make sure it’s alive. Then add the rest of the wet ingredients and stir in 5-1/2 to 6 cups white whole wheat flour until you have a smooth and soft dough (non-sticky) Turn that dough onto a floured surface and now it’s time to gently knead in your raisins. It took me about 5 minutes of gentle kneading to get all the raisins incorporated. By that time my dough was smooth and elastic, and all ready to go in a greased bowl for the first rise. Cover that bowl with plastic wrap, stick in a warm place and go sit on Pinterest for about 45 minutes while you wait 😉 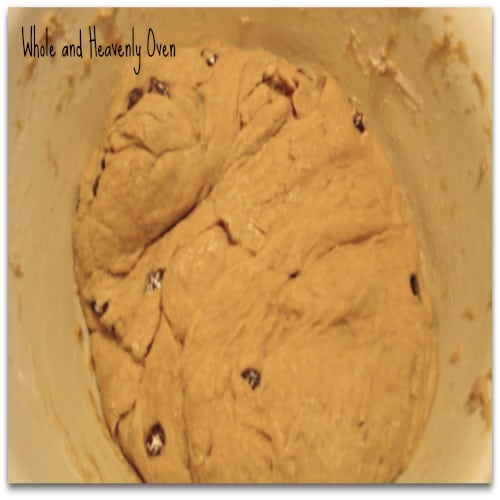 45 minutes later your dough should be doubled in size and ready for the next step:

Place your doughnuts on parchment-paper lined baking sheets and let sit 25 minutes for the second rise. 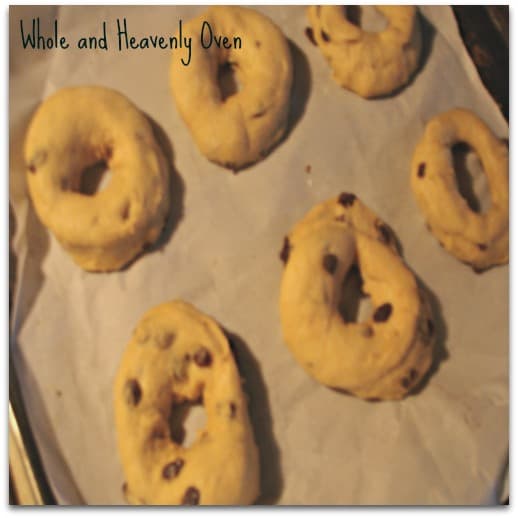 25 minutes later your doughnuts should be doubled in size and ready to bake!!

Heat your oven to 400 F. While your oven is heating it’s time to prepare the cinnamon-sugar! My personal fav part 😀 Combine your 3/4 cup coconut sugar and your 1 tablespoon ground cinnamon. While you’re at it, you might as well melt your butter for dipping!

By now your oven should be heated and now it’s time for the baking!

The bake time should only take 10-12 minutes, or until they’re golden brown. Good thing too ’cause by now you’re probably starving!

Once your doughnuts are done, immediately dip the tops in the melted butter and roll top in cinnamon-sugar. (If you’re like me, I like to roll it around in the cinnamon sugar for awhile 😉 )

Place on wire cooling racks to cool 5 minutes. Or, if you’re like me, burn your mouth ’cause you just can’t wait 5 more minutes. 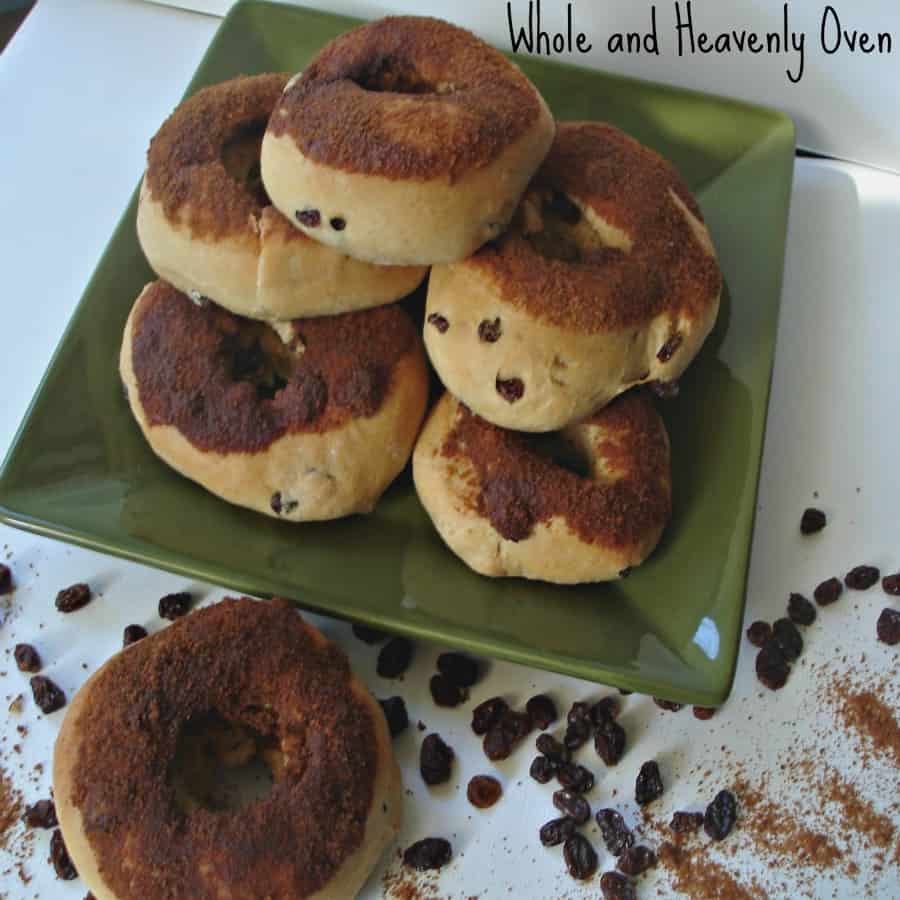 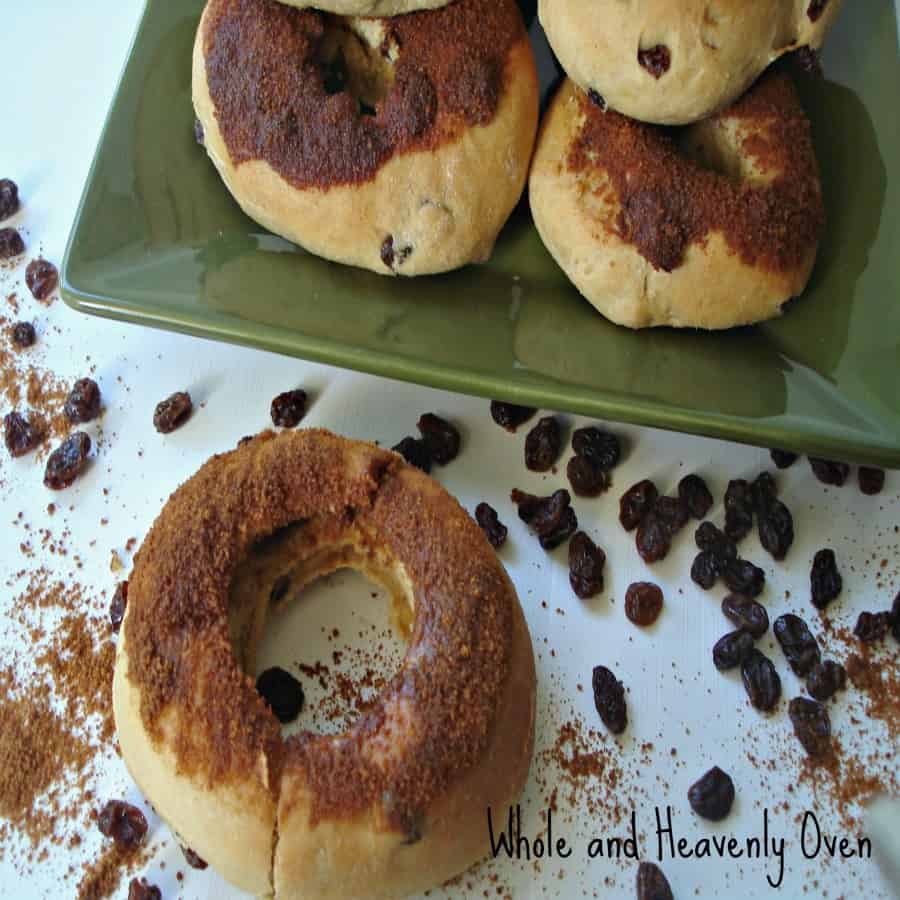 This recipe makes 20 doughnuts, but it’s very easy to cut the recipe in half. Or, you can make the 20 doughnuts and freeze a few of ’em (un-dipped in butter and cinnamon-sugar!) for up to a week. When you’re ready to defrost them, heat ’em up in the toaster or the microwave and THEN dip the warm tops in butter and cinnamon-sugar. How easy is that??

Once they are dipped in the butter and cinnamon-sugar they must be used on the same day. Otherwise the top will get soggy and won’t have that nice cinnamon crunch.

Believe, me though. You won’t have any trouble with that. I made 20 of these doughnuts the other morning and within 2 hours there were only 4 left. 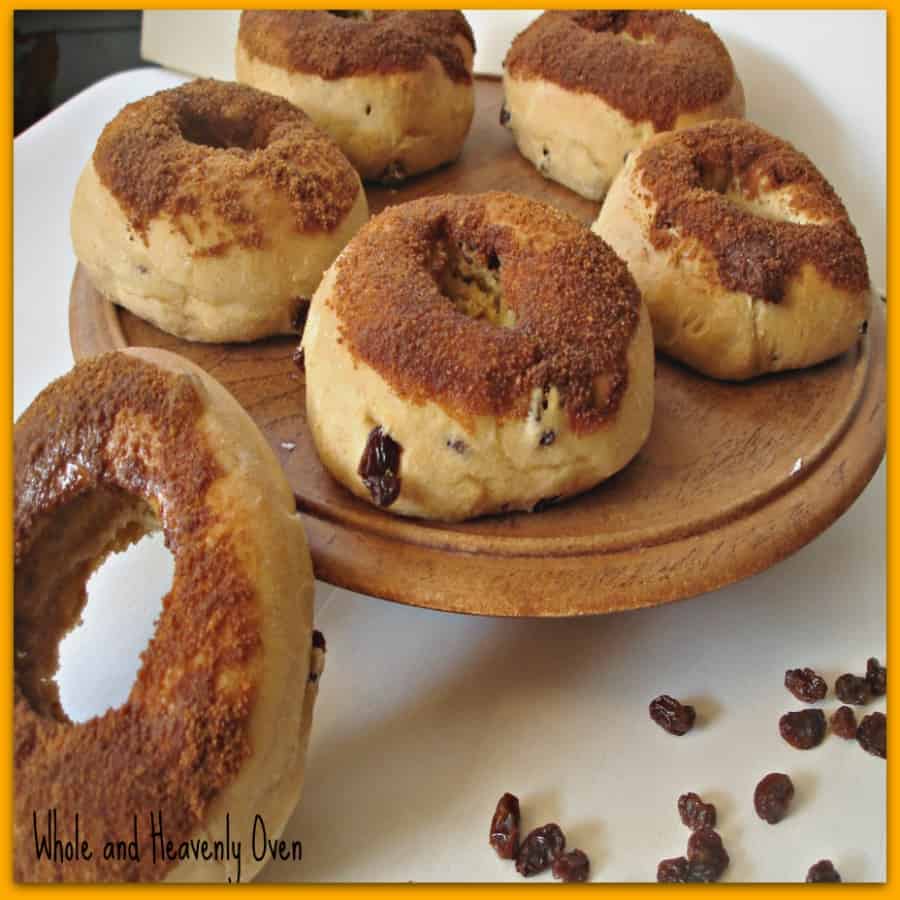 There! That wasn’t hard at all, was it?

Skip the Starbucks drive-thru this morning and take an hour and a half to make these. You know what? Do yourself a favor and make these now. Seriously, they are worth it. 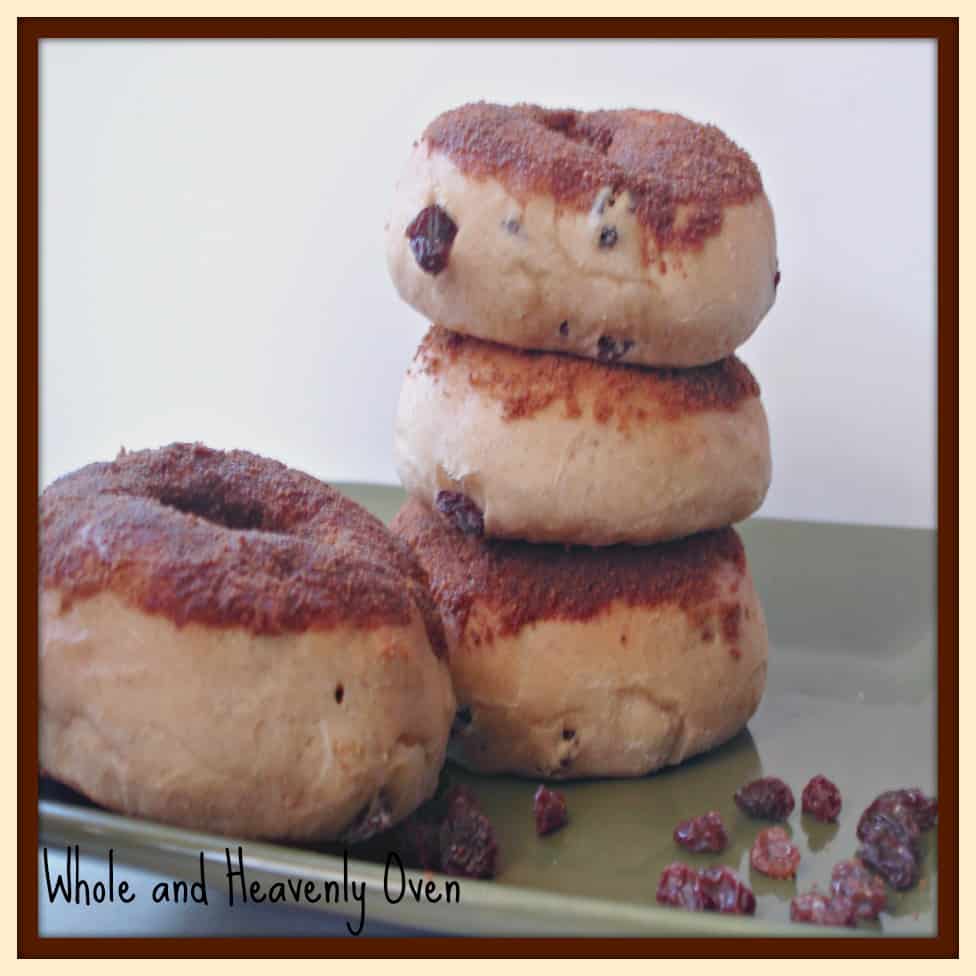 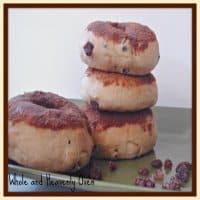 Adapted from Brown Eyed Baker
I know you’ll love all my other doughnut recipes!

{One of my all-time favorite doughnut recipes!} 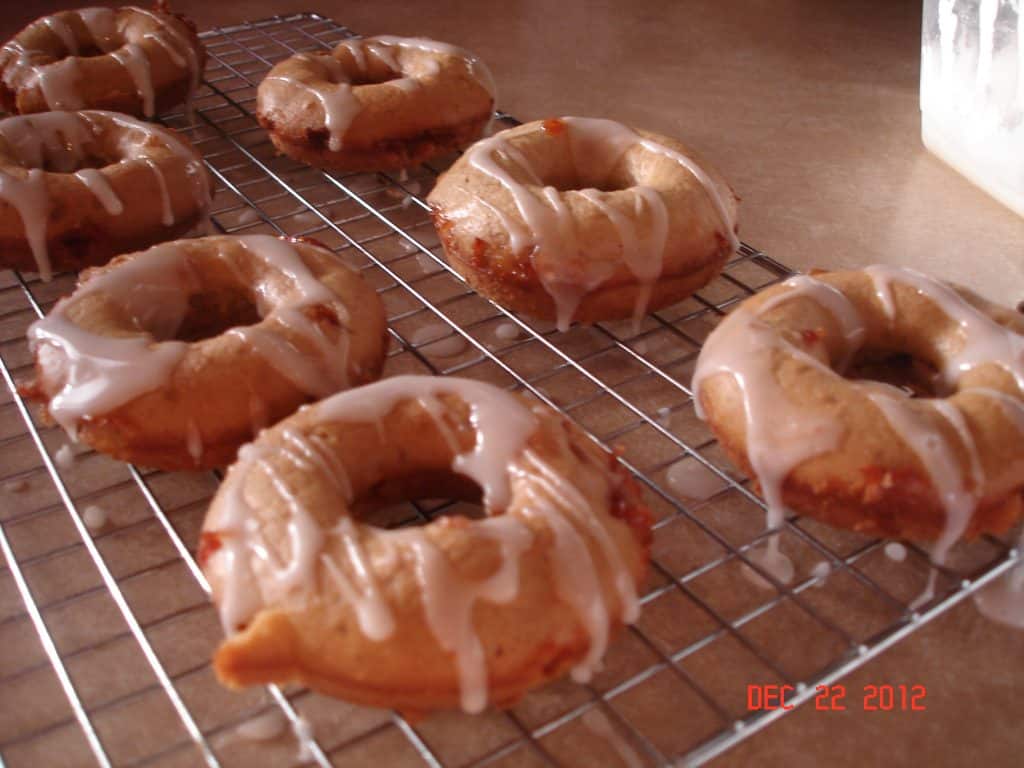 {Moist, chocolate-y and so easy!} 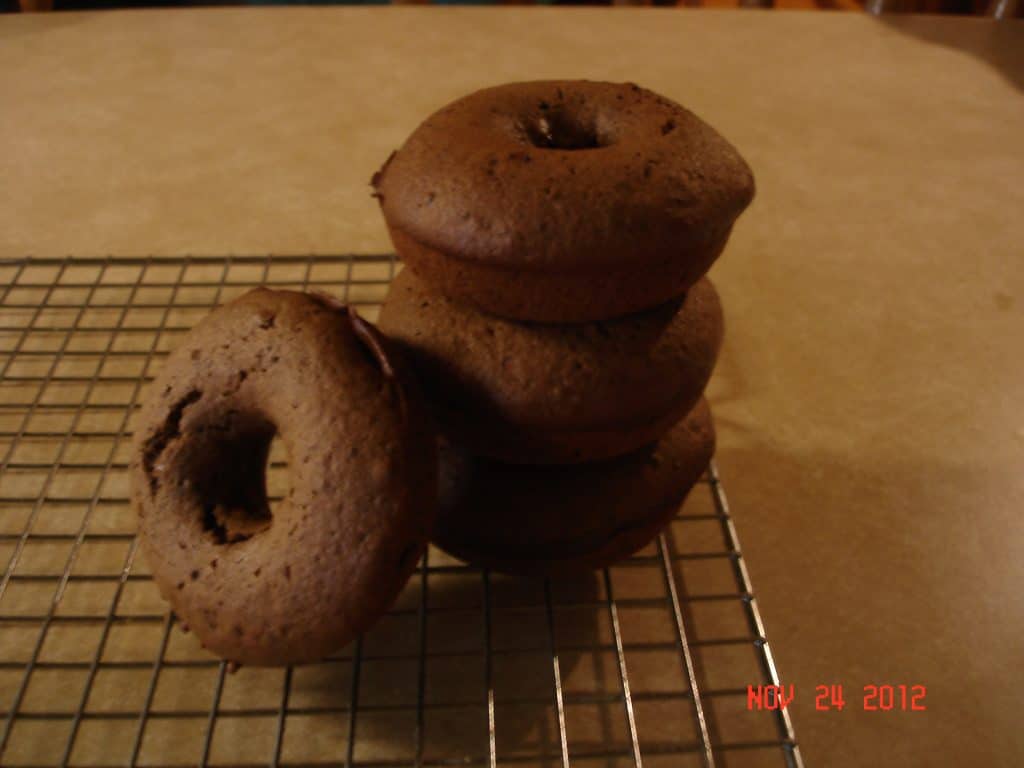 {Orange-pineapple doughnuts with a lovely sticky glaze! NOTE: These were enjoyed a little TOO much. Let’s just say I’m probably going to have to hire classic carpet cleaners to get it outta the carpet! 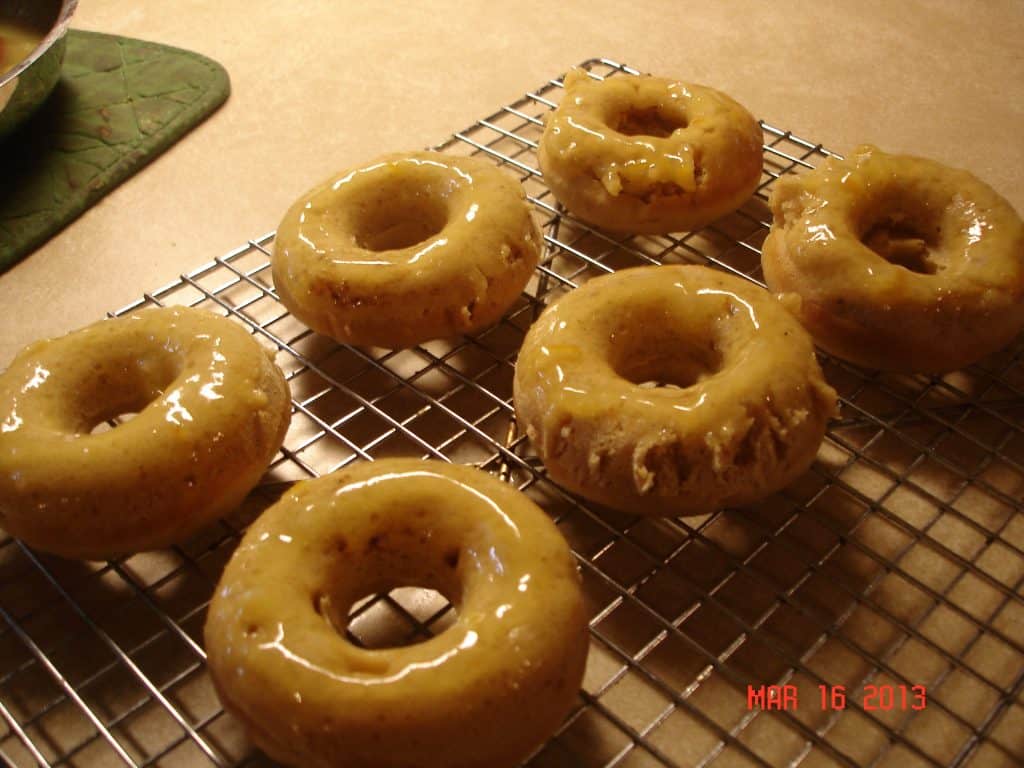 Hey there! I'm Sarah, the sweets-obsessed, veggie-loving girl behind the blog. I believe healthy food should taste amazing and I want to show you how! Read More >>