Made in one pan in only 10 minutes and loaded with Parmesan and sweet cherry tomatoes, these zucchini “noodles” are a simple and healthy vegetarian meal you’ll want to make again and again! 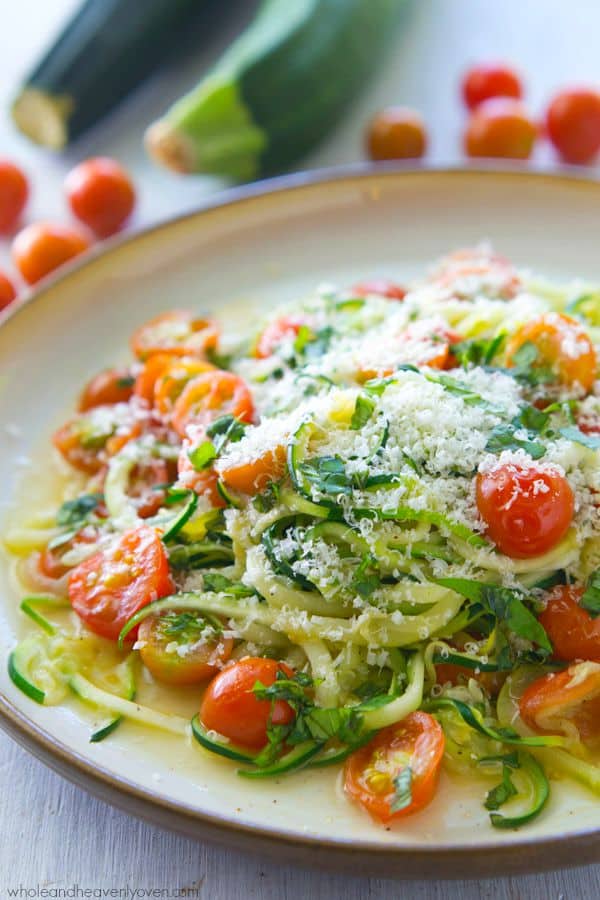 Friends, I am seriously LATE to this whole make-legit-noodles-from-zucchini thing that has clearly taken over the Internet the past few months.

I actually got my spiralizer a whopping 6 months ago and I could probably count on one hand the number of times I’ve used it. Ummm, get with the program, Sarah! 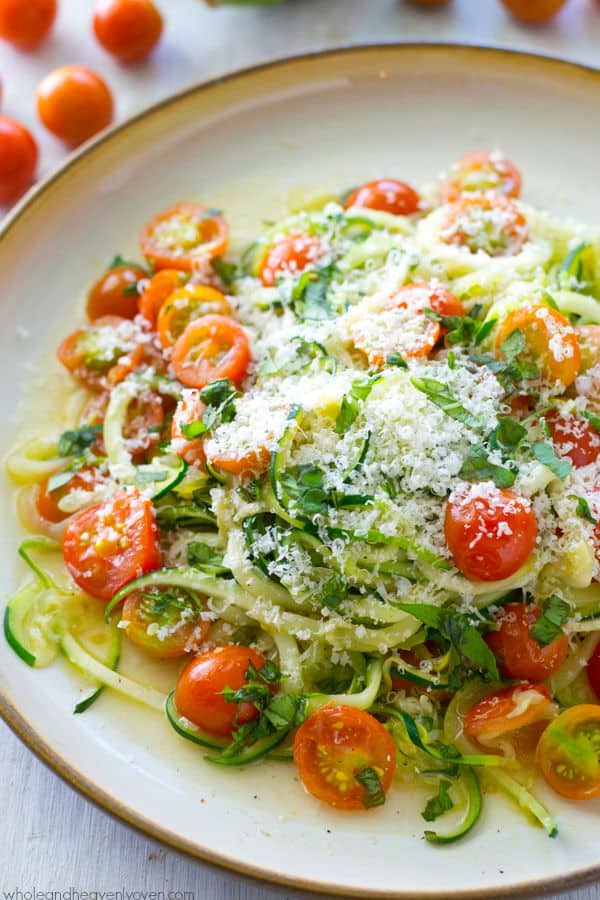 I’m setting out to change that ludicrous business right here and right now. Those 10 million zucchinis, summer squash and sweet peppers currently occupying an entire counter of my kitchen are just not gonna spiralize themselves.
And uh, I need an arm workout anyway. No kidding, guys, turning the handle of a spiralizer WORKS those arms!
I’m going to have killer arm muscles by the end of August, I just know it. 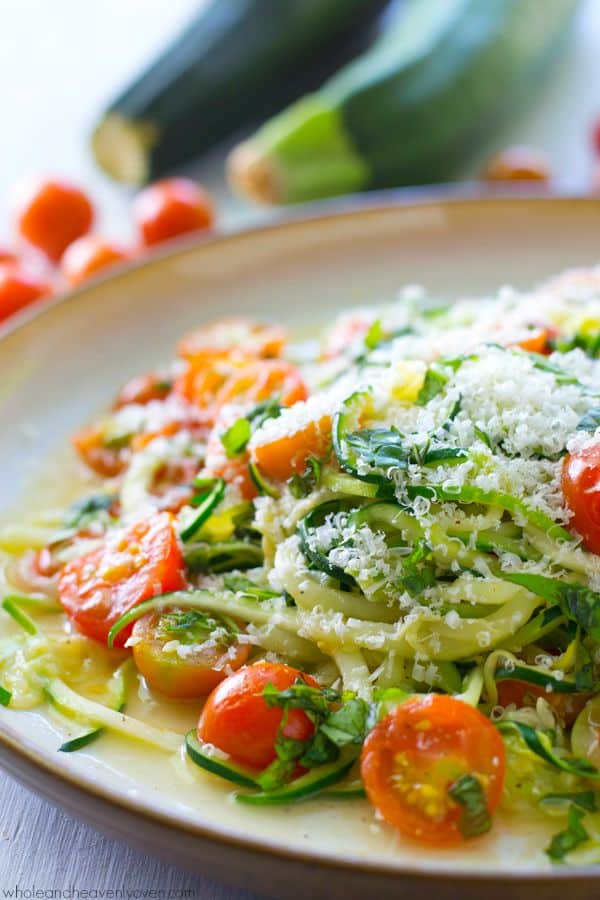 Putting all that bicep/tricep nonsense aside, we really should discuss today’s noodle perfection. Um, where to start except the simple fact that I am OBSESSED!
I mean this. → → → You just cannot help but ♥ ♥ ♥. 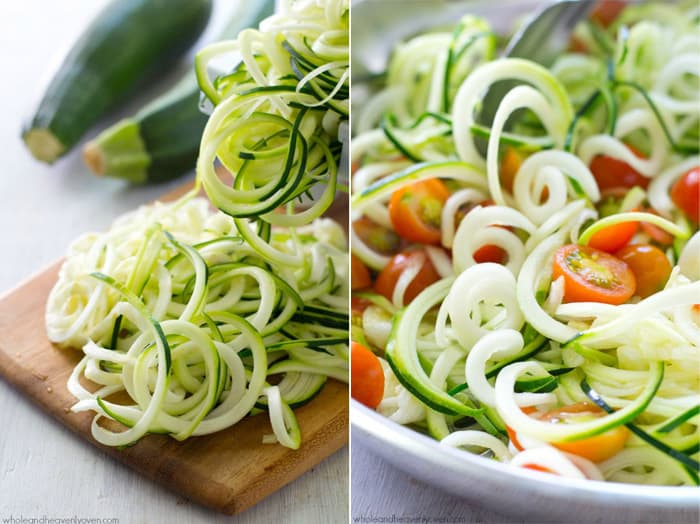 First off, let’s discuss the fact that you ARE going to need a spiralizer to make zucchini noodles. Simply shredding the zucchini won’t give you the same “noodle-like” shape that the world is obsessing over. I got mine from Sur la Table for only $25 and I’d totally recommend taking the plunge and getting one!—they’re so worth it, because you can seriously cut SO many veggies easily in half the time!
P.S. Nobody paid me to say that stuff. I’m just in love with the veg noodles over here. Peaaaace! 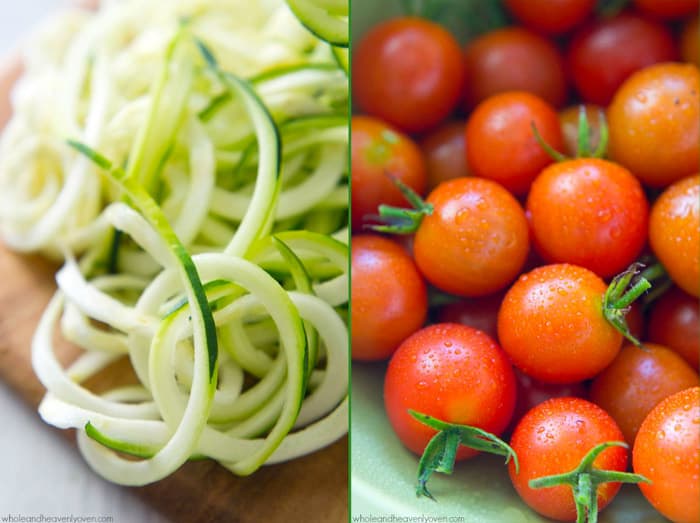 Once you have your noodles cut, let’s all just take a moment and gaze at this veggie perfection.
Sidenote obsession: Aren’t those cherry tomatoes the CUTEST?! I literally have 1.5 million of them reproducing at lightening-speed. I can’t them fast enough.
Now all you have to do is throw those gorgeous green noodles and a handful of cherry tomatoes in a skillet with some olive oil + garlicky goodness…..
Mmmmhmmm….. 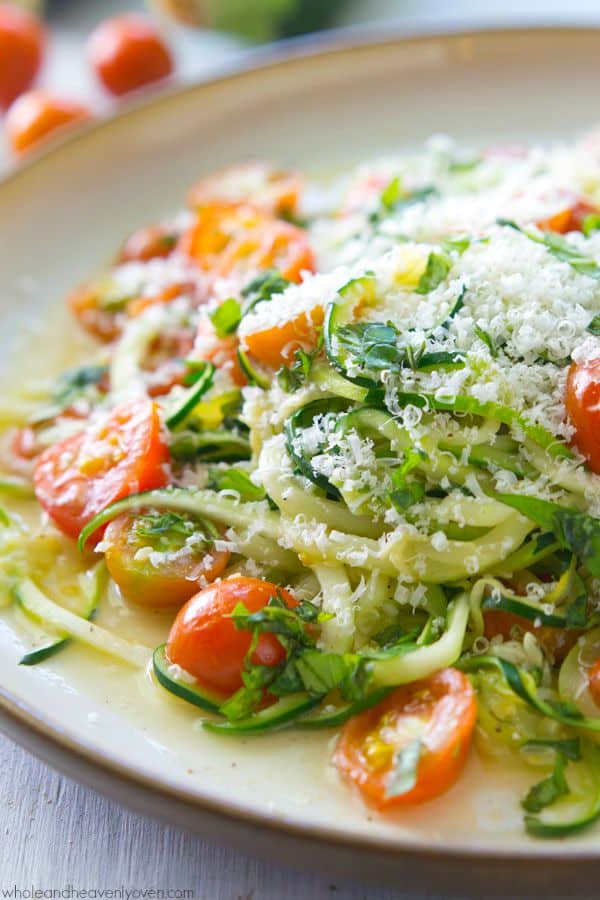 It’s not going to take any time at all for the noodles to cook. We want them softened, but still slightly tender—I usually cook mine no longer than 5 minutes. Any longer and the noodles will soften too much and will turn mushy. No good.
Now the Parmesan. Dump it on and dump it on goooooood. 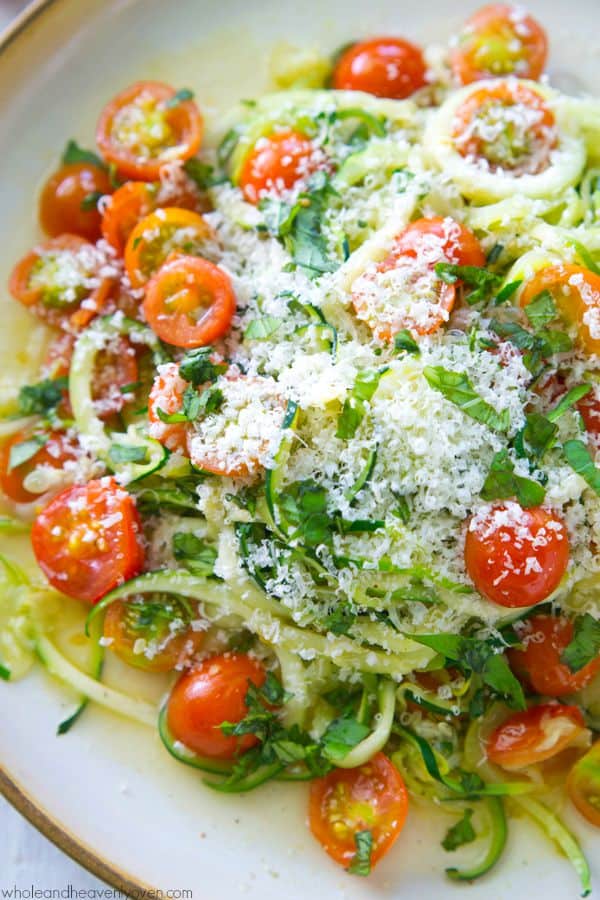 Then feast your tastebuds upon a plateful of THE healthiest “pasta” you’ll ever meet.
The end. I’m off to make another pan of these noodles. ♥ 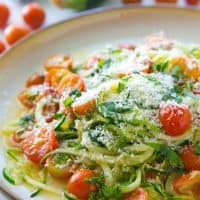 Made in one pan in only 10 minutes and loaded with Parmesan and sweet cherry tomatoes, these zucchini "noodles" are a simple and healthy vegetarian meal you'll want to make again and again!
Prep Time 5 minutes
Cook Time 5 minutes
Total Time 10 minutes
Servings 2 servings

Tried this recipe?Leave a comment and rating below. Feel free to share a picture on Instagram and tag @wholeandheavenlyoven or hashtag it #wholeandheavenlyoven
More zucchini? ‘Tis the seasoooooon!
Glazed Zucchini Bread Banana Muffins 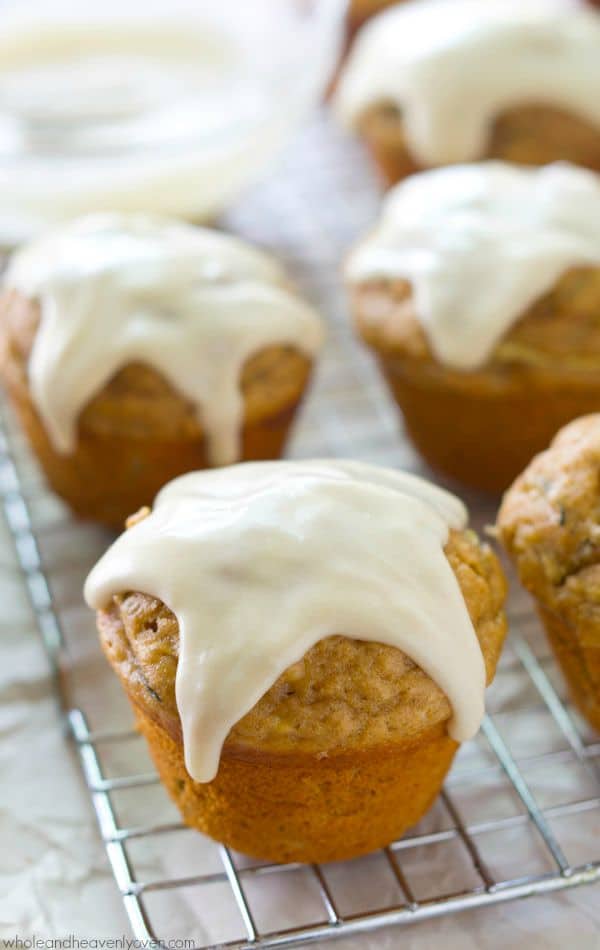 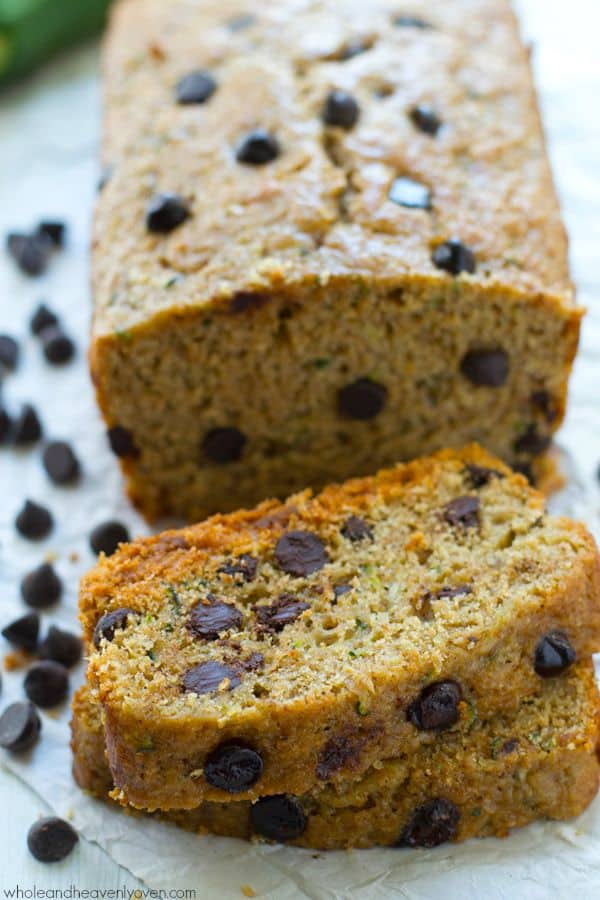