Swirled with a citrus-y orange-cinnamon sugar filling and drizzled with tons of cream cheese icing, these bright, cheerful cinnamon rolls are ideal for any spring brunch! 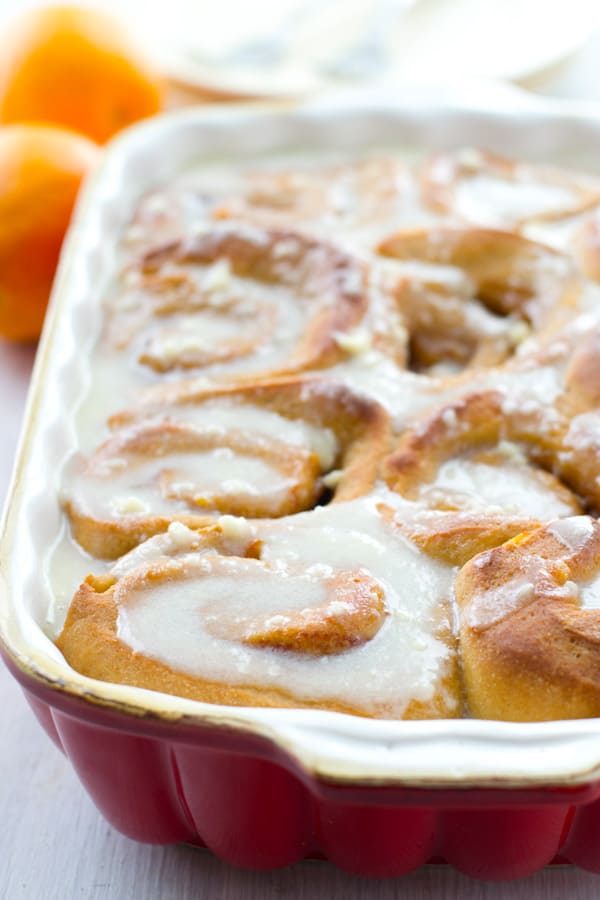 Well, it happened. I finally found a cinnamon roll so honkin’ huge and wonderful, I met my match.

A worthy opponent, but never too big to take down Sarah the Cinnamon Roll Hulk.

I’m crushing here. Totally crushing on all this wonderful, carb-loaded goodness that’s all up in your face right now. 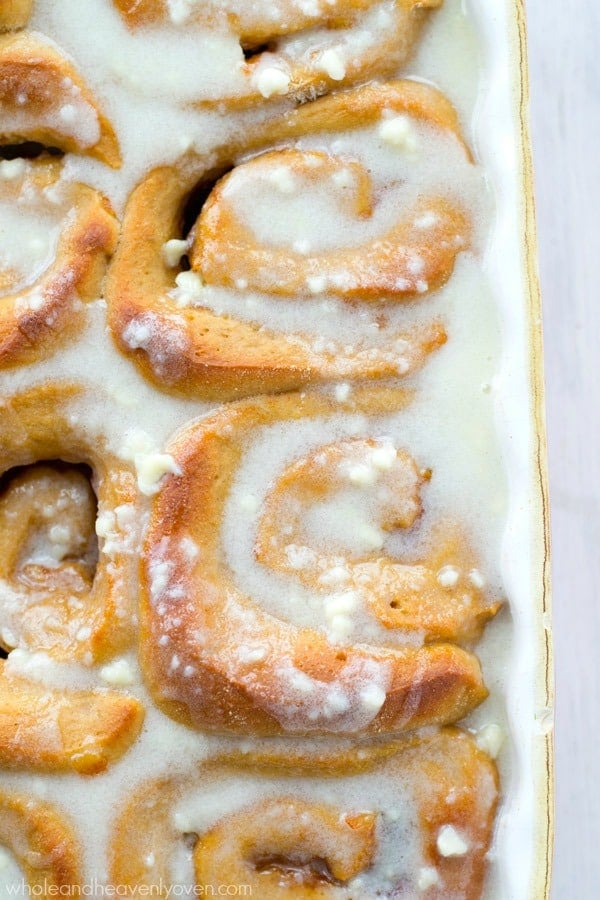 And kinda wishing it was legitly in MY face right now, but nope that’s not happening today. I’m currently in the car on my way up to Chicago to hop on a plane to Orlando this afternoon.

WHY was I such a nice person to leave all these cinnamon rolls behind for my family to devour?! I should have snuck like 10 in my suitcase…

The unreal smell of them probably would have gotten me stopped in security for sure, so I guess maybe it’s for the best.

Oh, and p.s. It feels super-weird to me writing this post so far ahead. (right now I’m really writing this on Tuesday) And I have literally tons more posts scheduled to go up in the next few weeks so I can concentrate on partying it up with the palm trees in Florida.

So I’m not leaving you entirely. I’ll still be around to reply to comments and blow up your Instagram feed. Don’t you worry. 😉 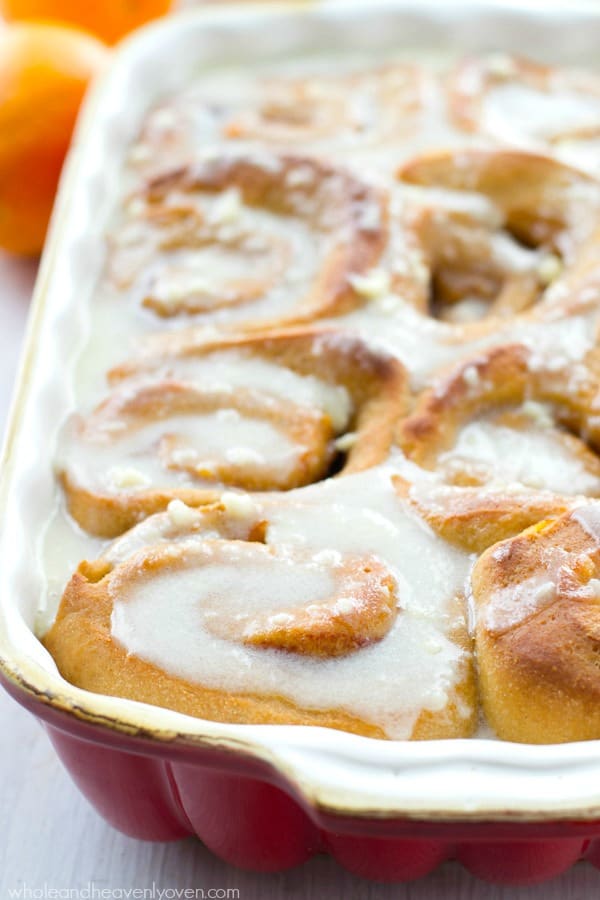 And now it is cinnamon roll time. Prepare those tastebuds and those fat pants. These babies mean BUSINESS.

My gosh, guys. I don’t even have the words for the level of perfection these fabulous cinnamon rolls hold. They are so soft and buttery. Exploding with the orange and cinnamon sugary flavors. Literally drowning in 8 inches of cream cheese icing.

Yes, I think I will take those fat pants now… 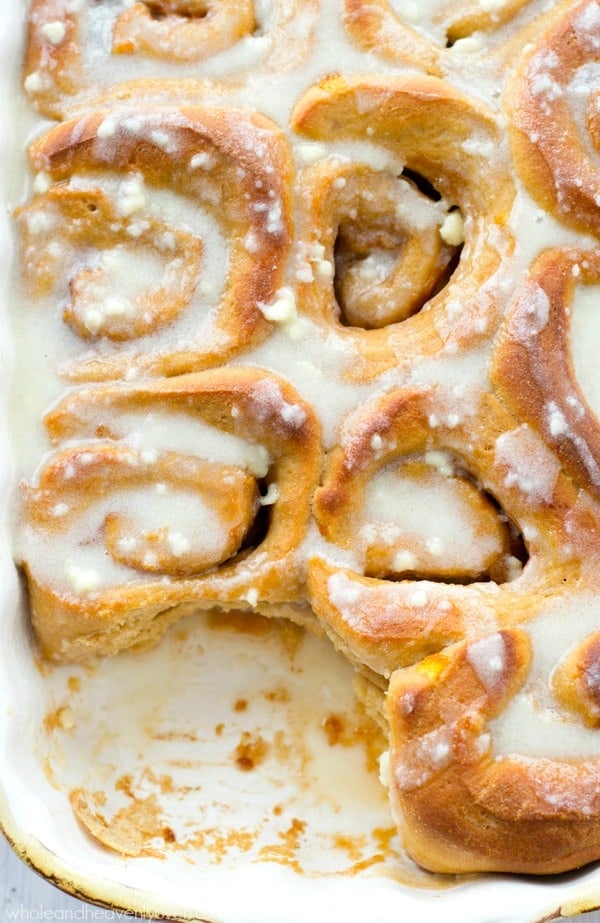 All the bright and cheery orange goodness we’ve got going on here definitely makes these rolls worthy for any spring fling you’re planning. I’m thinking breakfast, brunch, mid-afternoon snack, after-dinner snack, and/or midnight snack are all worthy times to break out these cinnamon rolls.

Let’s be honest here: Anytime is cinnamon roll time. Can I get a AMEN? 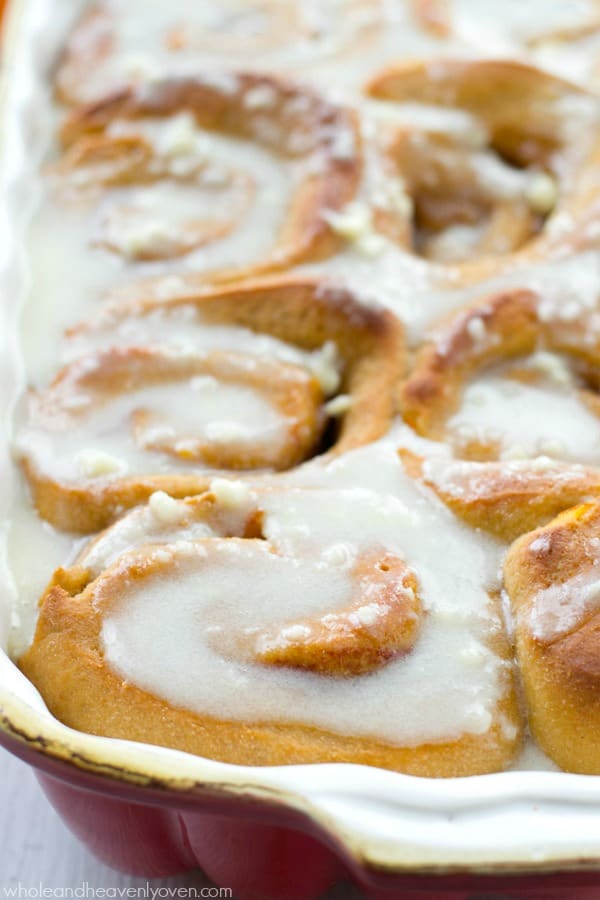 If you still have yet to get on board with the whole overnight-cinnamon rolls craze that’s sweeping across the web, trust me: You MUST! It is absolutely as awesome as it’s cracked up to be: Tonight’s few-minutes-of-prep-work equals tomorrow’s Saturday-morning chow-down.

And I do mean chow-down. The smell of these babies baking is going to bring the whole neighborhood to your door.

First off, the dough for these cinnamon rolls. It’s seriously SO easy to whip up and a breeze to work with. Hey, all you beginning yeast bread-makers! This recipe is for you. 🙂

The filling. GAH! Can we break for a few seconds so I can go scream into my pillow how much I’m crushing on this filling? All the beautiful butter, cinnamon sugary-goodness and luscious orange marmalade is swirled into these rolls and I am officially about to die from the nomz factors. 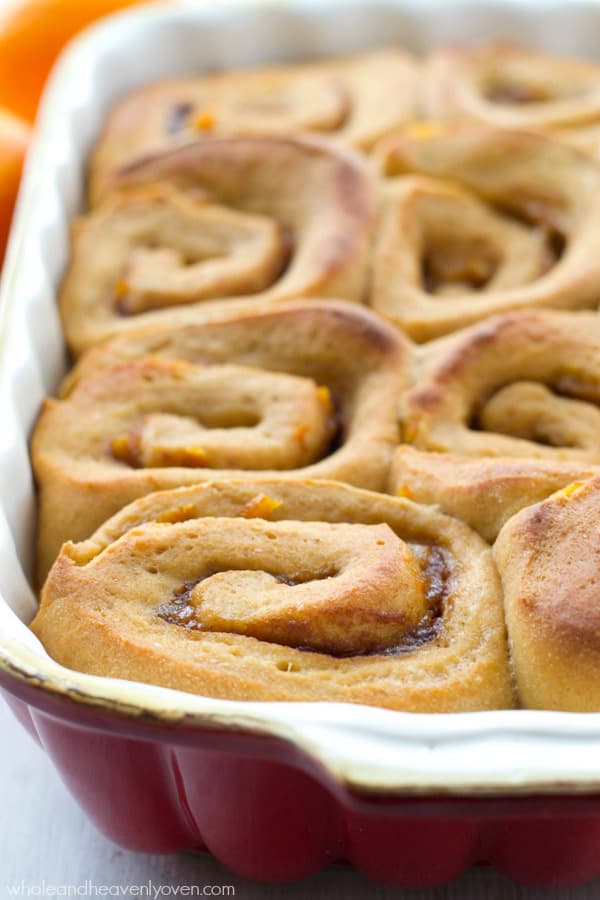 My favorite part? No additional rise-time necessary after removing these cinnamon rolls from the fridge the next day! Just pop that pan in the oven and let the magic happen while you put on that pot of coffee.

Actually, while they bake we’ve got just a LITTLE more magic to spin. And that’s called icing. Obviously the most important part about any good cinnamon roll.

Sweet ‘n’ tangy from the cream cheese and slightly citrus-y from a splash of fresh orange juice, this icing is finger-in-the-bowl kinda dreamy. So gooooooood! 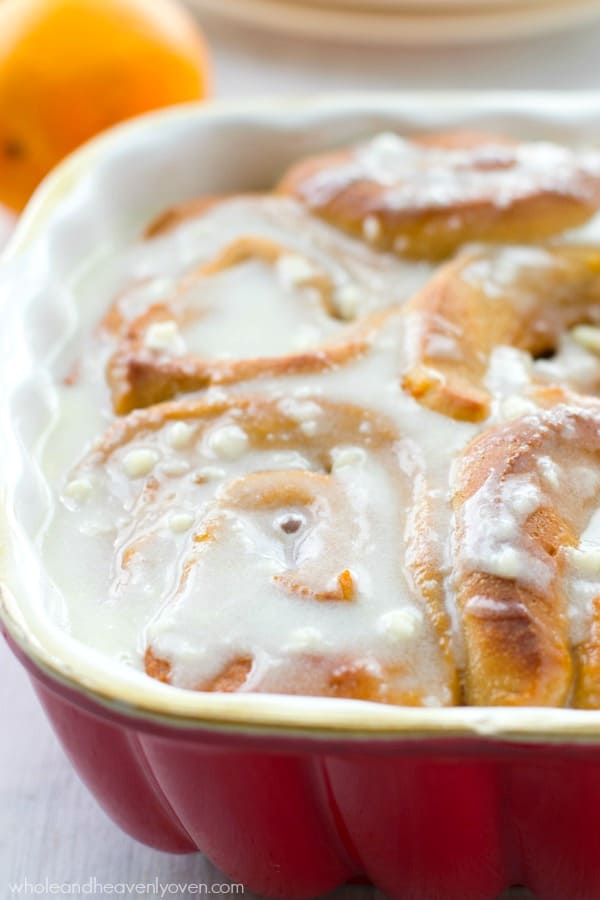 And then we devour.

These are good. Like really good. And my brain really cannot even formulate any more words to tell you how much you’re going to love these. 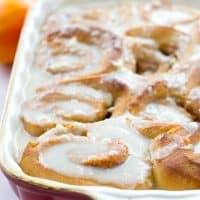 Swirled with a citrus-y orange marmalade-cinnamon sugar filling and drizzled with tons of cream cheese icing, these bright, cheerful cinnamon rolls are ideal for any spring brunch!
Servings 9 cinnamon rolls