Try this comforting corn chowder that has tons of corn flavor and plenty of potatoes in a rich, golden broth. For a vegetarian corn chowder, just leave the beef out! 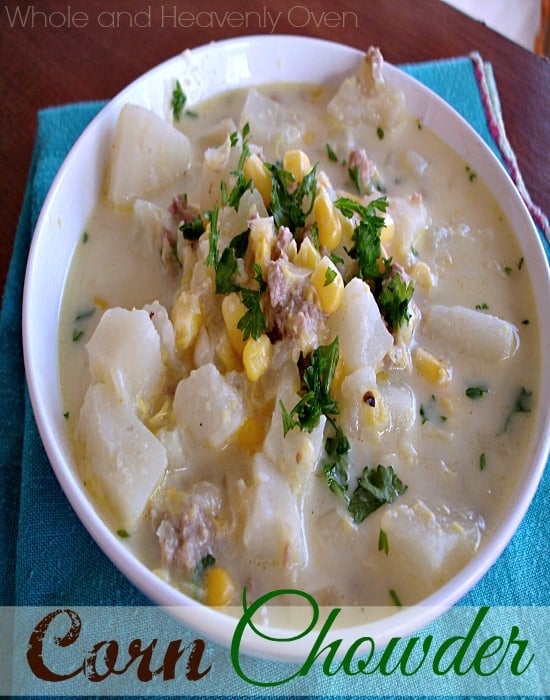 Brrrr! Is it ever COLD here in Wisconsin! We hit a high of a whopping 30 degrees the other day, and a few days ago, we got our first snow of the year. I guess you could say that winter is officially here, and so is soup season! One of my favorite parts of winter 🙂 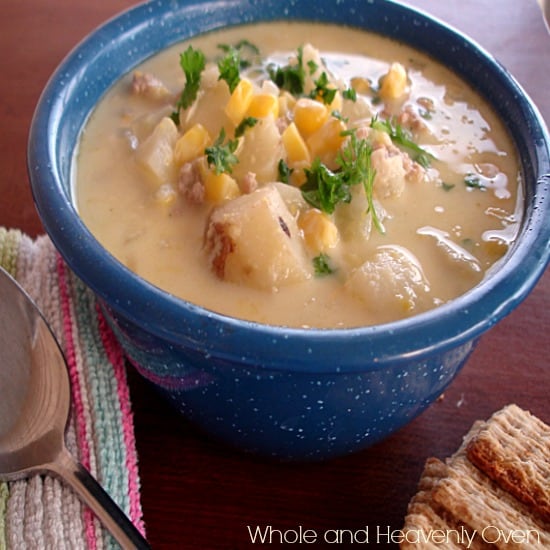 Okay, I’ll admit that I pulled out my soup pot a little early this year…..August actually 😀 Just couldn’t help myself! My Taste of Home magazine arrived in the middle of August and was jam-packed with TONS of soup recipes I needed to try! I’ve been making this corn chowder for about 3 years. It originally came from an America’s Test Kitchen magazine. Over time, I modified it to suit my families tastes until everyone agreed that it was perfect. It’s so good, I have never even TRIED another corn chowder recipe. 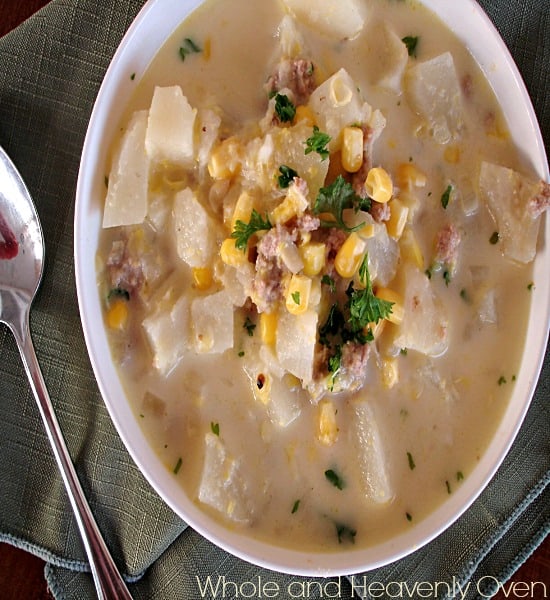 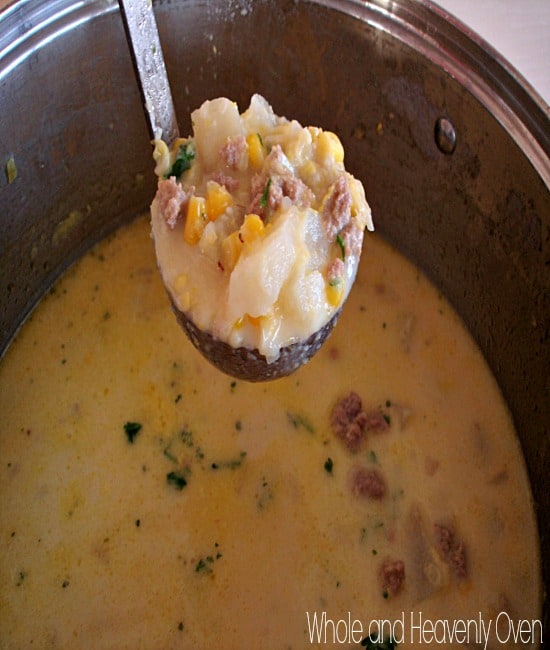 Because this soup is pure gold. Everything you would want a corn chowder to be: It’s smooth, creamy, and loaded with tons of sweet corn and soft potatoes. I also threw in some browned ground beef, just because my family loves their meat. But you can easily just leave it out and have a delicious vegetarian corn chowder. 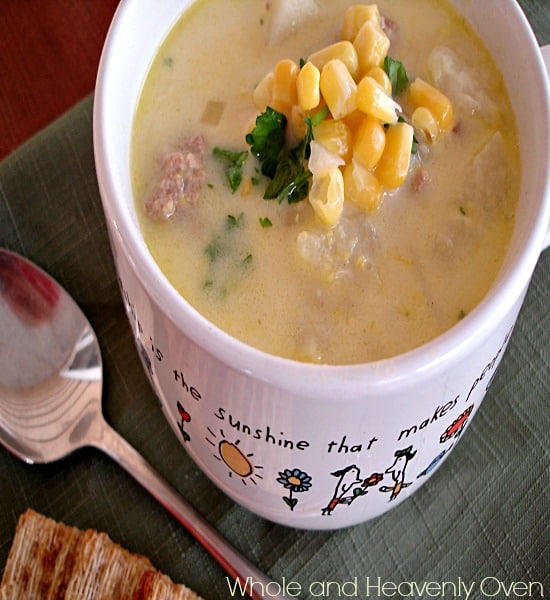 Now, I like my corn chowder with a TON of corn. I can’t stand those so-called corn chowders that have a few kernels of corn floating around with mushy potatoes in a gray, soupy broth. Ick….

How about a corn chowder that has a golden broth, soft potatoes, lots of corn, and lots of flavor?

THIS corn chowder recipe couldn’t be “cornier”….you’re going to be using two sources to get the utmost corn flavor. Canned corn AND frozen corn. But you can’t just toss the corn in there and expect it to turn out great. Here’s what you’re going to do to get the most prominent corn flavor:

1. You’re going to puree 2 (15 oz) cans sweet corn with 2 cups chicken broth in your blender until smooth. (it’s okay if there are a few chunks) This corn puree will help thicken your chowder and will provide a big boost of corn flavor.

2. Because we want some whole corn kernels in the chowder, we’re going to use frozen (thawed) corn and saute it with the browned ground beef to bring out the flavors. Pretty simple technique to get a strong corn flavor, but oh-so effective. 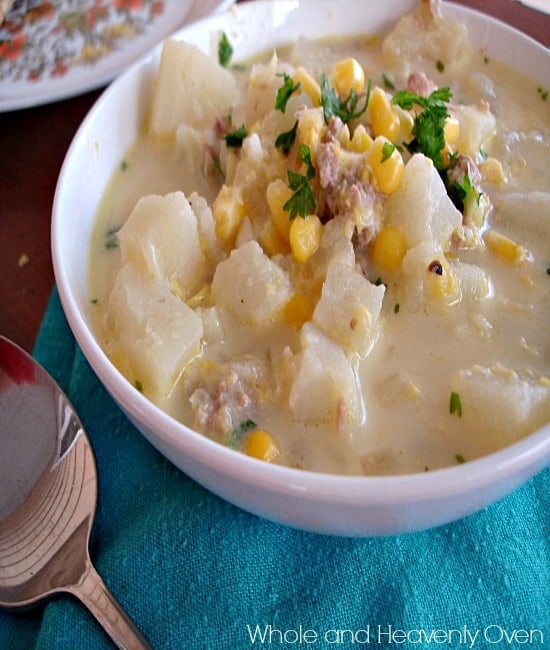 So this soup comes together in minutes, making it ideal for on-the-go supper, but still fancy enough for sit-down dinners. If you have time, I would definitely recommend taking the time to make homemade bread or rolls to go with the soup. I’ll just tell you that it makes this chowder taste 10x better— No lie.

I know you’re going to love this warm and comforting corn chowder. It’s been my family’s favorite soup for years now, and I’m so excited to finally be sharing my treasured recipe with you! 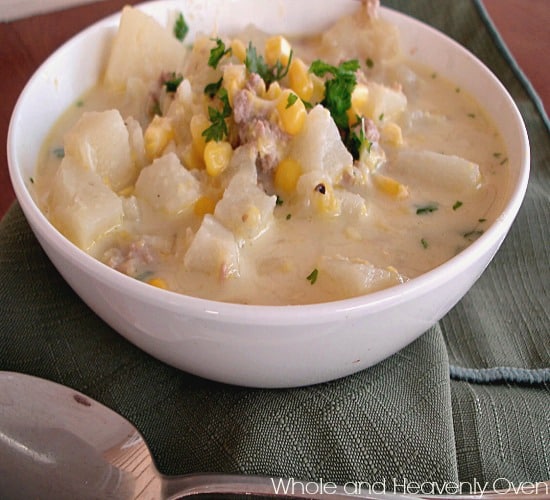 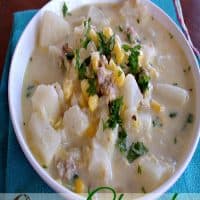 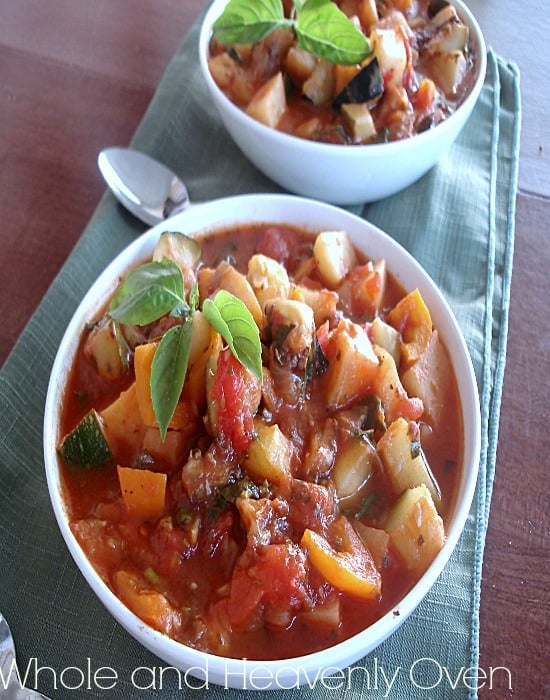 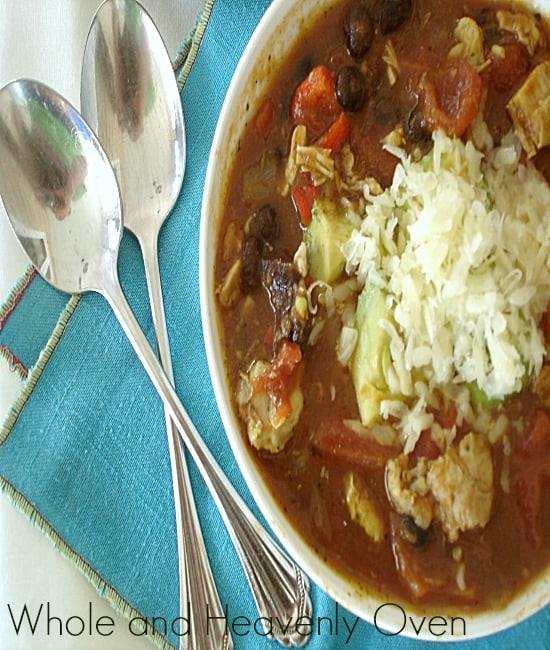 (Perfect way to use up leftover mashed potatoes!) 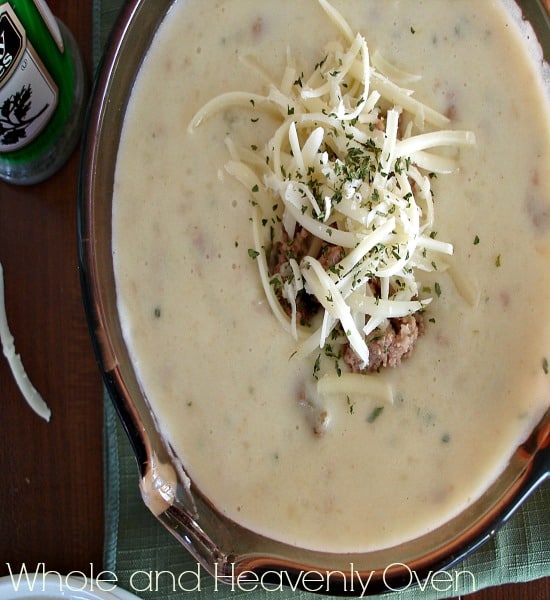