Need an impressive dessert for your next party? Put down that boxed yellow cake mix and instead, whip up these super-moist yellow coconut cupcakes that have an impressive cream cheese frosting and lots of toasted coconut on top! 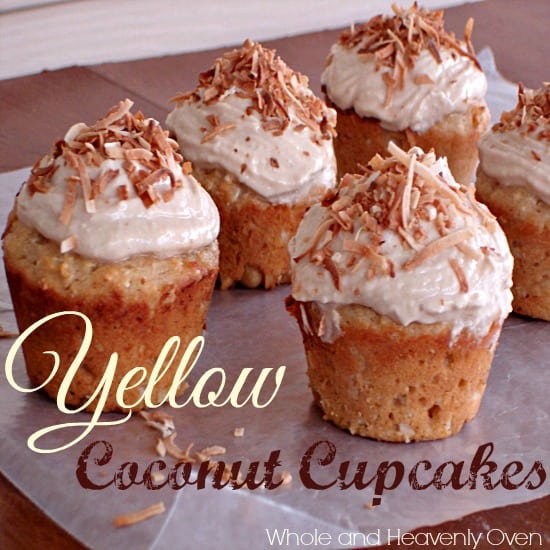 Guys, I apologize for the MIA status I’ve had recently. This past week has just been one of those weeks: Monday night while assisting a ballet class for younger kids, I landed wrong from a big jump and got a nasty sprained ankle, which is still giving me a lot of pain. I also caught a nasty cold in the middle of last week: (stuffy nose and bad cough.) Combine all that with not sleeping well either, because of the pain in my ankle. Yes, on a scale of 1 to 10 of bad weeks, I would rate last week a 15. Here’s to hoping that this week is better and that I can find the motivation to get back into the kitchen to cook up some great recipes for you guys!

Shall we move on to the cupcakes? Yes, yes, and yes. These moist and fluffy coconut cupcakes have a story behind them: My older brother, Daniel and his wife, Jessica are coming up on celebrating their 4th wedding anniversary. When they got married, my mom made their wedding cake: A three-tiered yellow coconut cake with a cream cheese frosting. It was purely incredible.

We were talking about their wedding anniversary the other night when they were here visiting, and I offered to make their wedding cake in an easy-to-serve cupcake form. I was thrilled when Daniel and Jessica quickly agreed, and I got right to work in the kitchen. 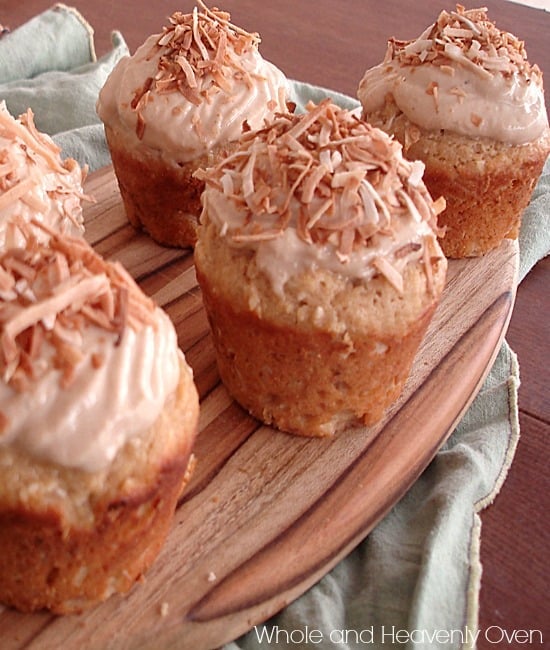 A few tests later, and I came up with perfectly-moist, unbelievably fluffy, and coconut-y yellow cupcakes that put any boxed cupcake mix to shame. And the cream cheese frosting? I could eat it with a spoon.

Unlike a lot of coconut cakes that I’ve had the misfortune of eating, these cupcakes are not dense, tough, or dry. I’ve got no tolerance for cake like that. Instead,  a moist, jam-packed coconut flavor shines through in every bite of these irresistible cupcakes that are crowned to perfection with a sweet and tangy cream cheese frosting and lots of toasted coconut. 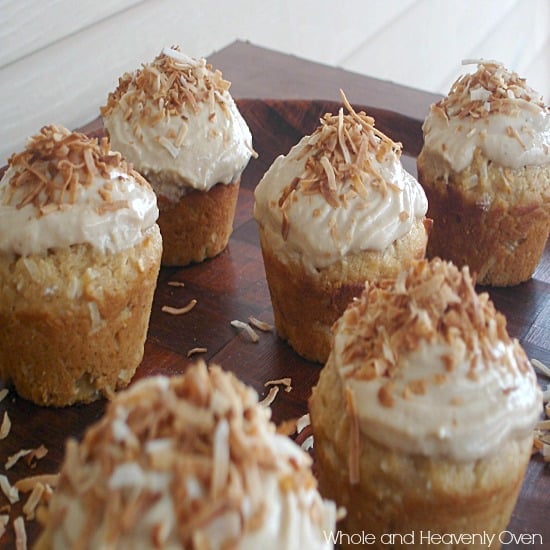 Bake your cupcakes at 350F 22-23 minutes or until a toothpick comes out clean or with a few moist crumbs.

It only takes a few minutes for your cupcakes to cool, so while you wait it’s time to whip up some cream cheese magic!

Softened cream cheese, softened butter, a little bit of coconut sugar, a splash of vanilla, and a few drops of liquid Stevia get whipped to smooth and creamy heaven.

Piped to perfection over your now-cool moist and fluffy coconut cupcakes.

Topped with generous sprinkle of toasted coconut for a pretty finishing touch.

Bring these gorgeous cupcakes to any holiday get-together and watch them vanish. Or hoard them all to yourself like I do 😉 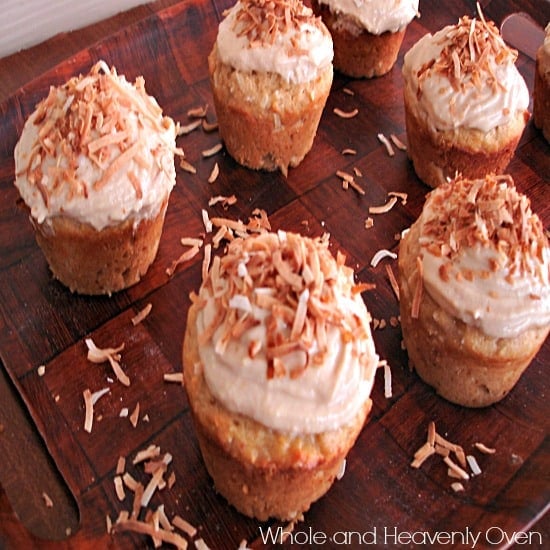 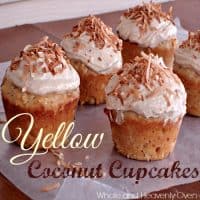 Need an impressive dessert for your next party? Put down that boxed yellow cake mix and instead, whip up these super-moist yellow coconut cupcakes that have an impressive cream cheese frosting and lots of toasted coconut on top!
Prep Time 15 minutes
Cook Time 25 minutes
Total Time 40 minutes
Servings 1 dozen cupcakes.