Sauteed golden pears, crunchy pecans and soft golden raisins star in this simple green salad that would make a fabulous accompaniment to any fall dinner! 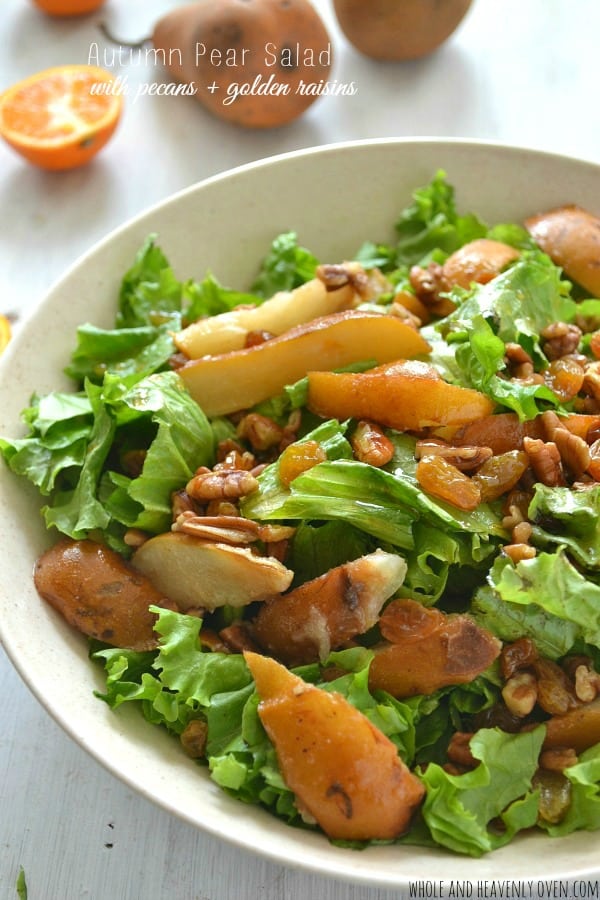 Because, well. The past week was pretty dang indulgent. 😉

Oh, and a tangy orange-maple vinaigrette to top it all off, but I couldn’t fit that into the title…

So FYI: My salad craze doesn’t stop once we hit fall. I spend basically ALL summer feasting on salad after salad, and I’m just not gonna be able to give up salads for the next 5-ish months.  As you’ll soon see, I have MANY fall/winter salads up my sleeve that are pretty epic. 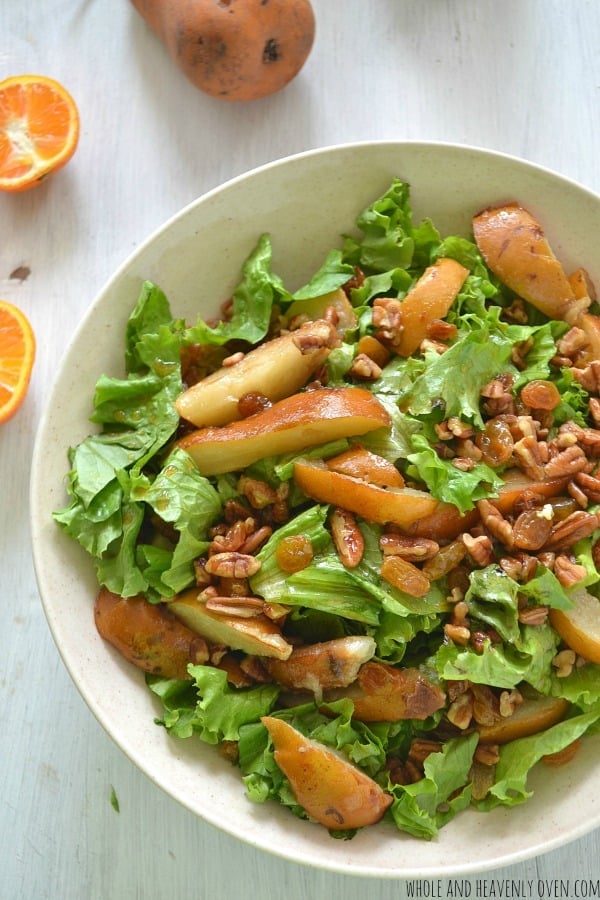 On a little bit of a different note, I have some exciting news for you guys! I am proud to announce that as of yesterday, Whole and Heavenly Oven now offers Ziplist! Some of you may know what ZL is already, but for those of you who don’t, Ziplist is pretty much your best friend in any recipe planning and organization.

It offers your own recipe box AND shopping list all online where you can save your favorite recipes, plan your meals, write your shopping lists, and more! 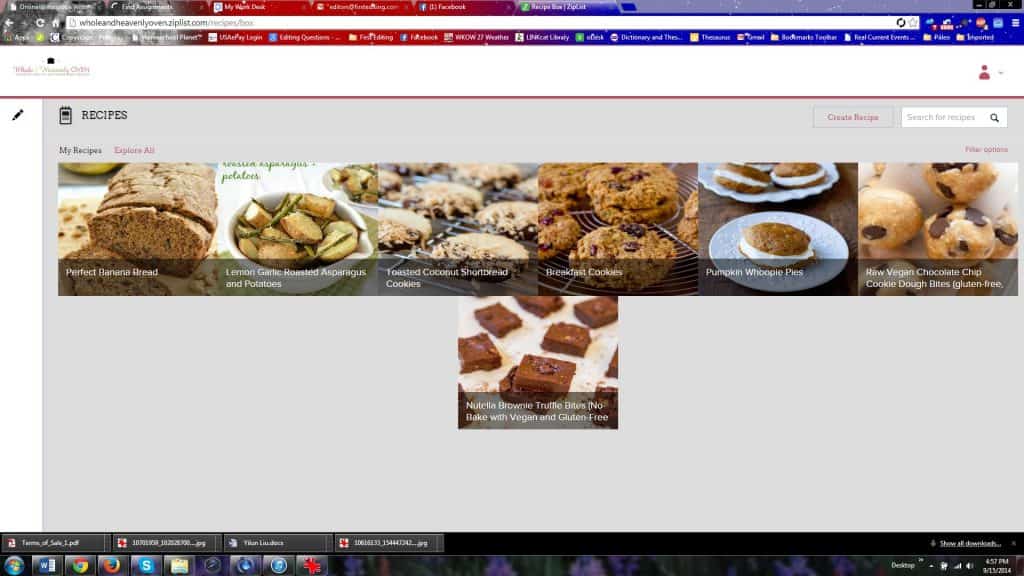 Now that WAHO is a partner with Ziplist, you’ll be able to save ALL of my recipes to your own personal recipe box on my blog! How awesome is that?! Your meal planning just got 10x more easy. 😀 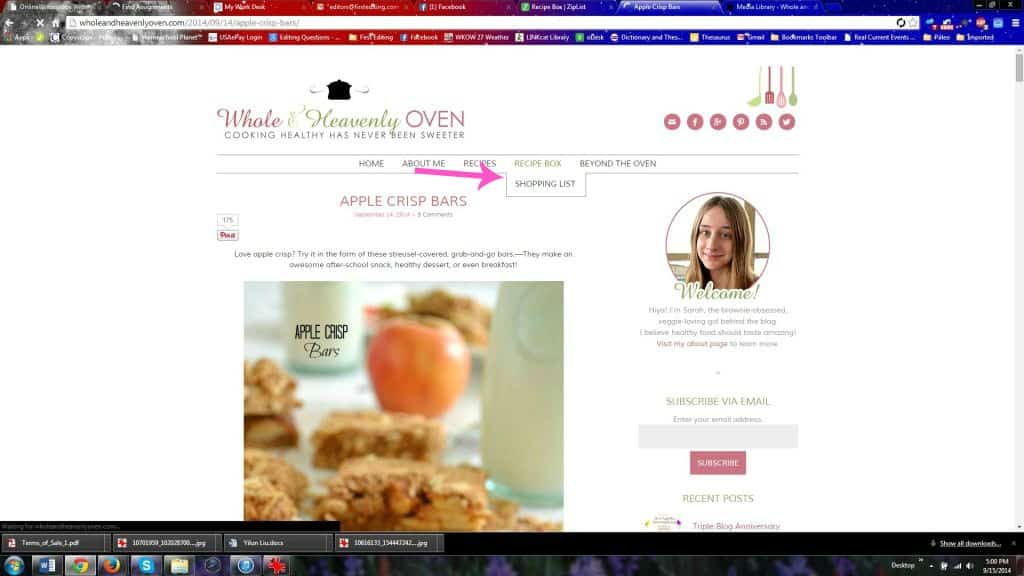 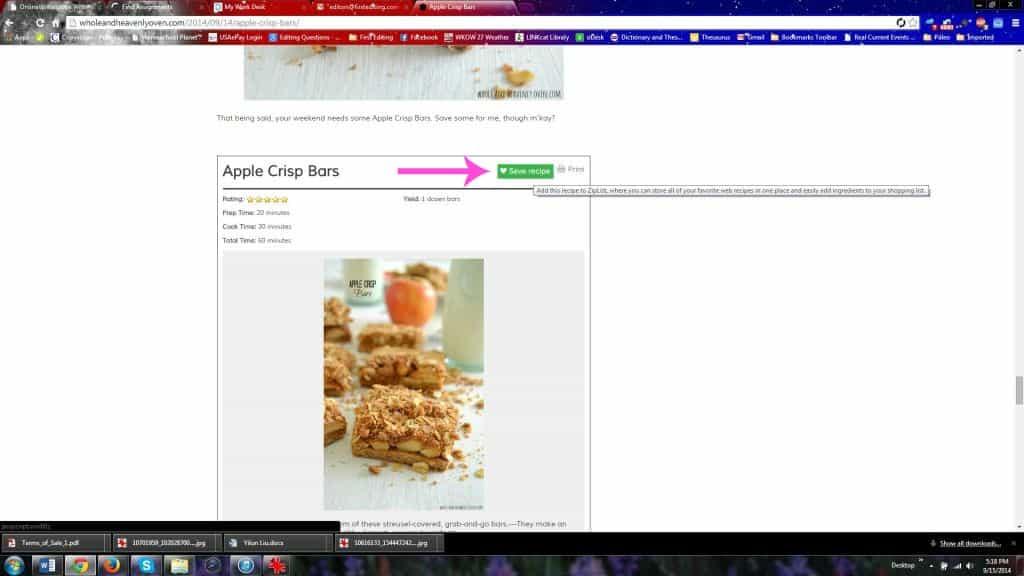 So getting back to this salad….

This simple green salad is super-fresh and light, but still has that cozy-fall feel to it that instantly makes you think about warm scarves, hot cups of chai tea, and jumping in piles of leaves.

Yes, I still jump in piles of leaves. Totally the best part about having to rake up all those little devils.

That, and the piping-hot cup of hot cocoa and the crunchy caramel apple I usually treat myself to when I come inside. ♥ 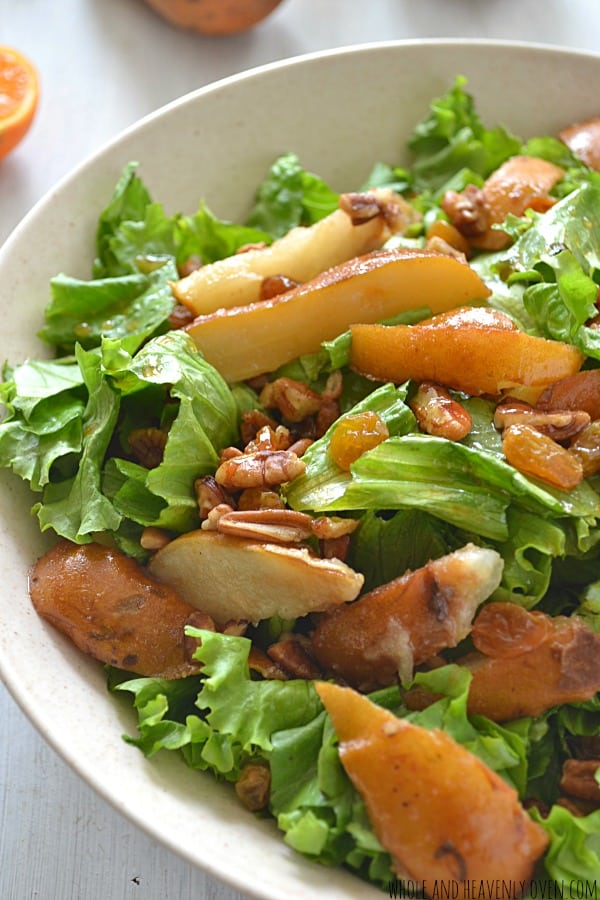 Before tossing ‘them gorgeous pears in your salad, there’s one itty-bitty step we gotta do first—The gods of extra-calories were whispering in my ear to caramelize those pretty pears in a little bit of butter+ a dash of maple syrup.

Yes, that was a pretty good decision. 😀 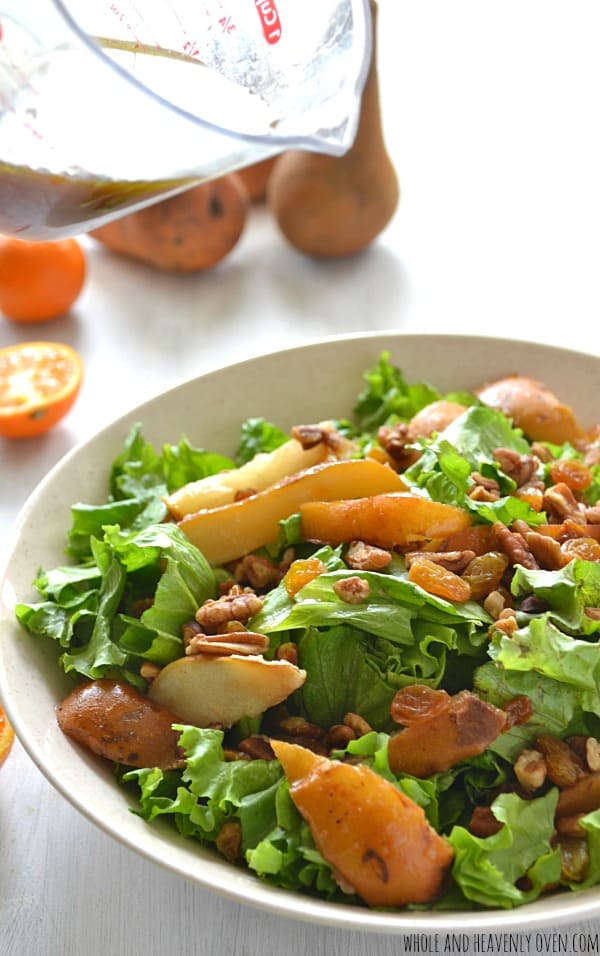 Make sure NOT to overcook the pears though, otherwise you’ll end up with mush. Just stir ’em around in the pan until they’re just tender.

Let them cool for a few….

Toss ’em in those greens and sprinkle on those pecans and raisins. 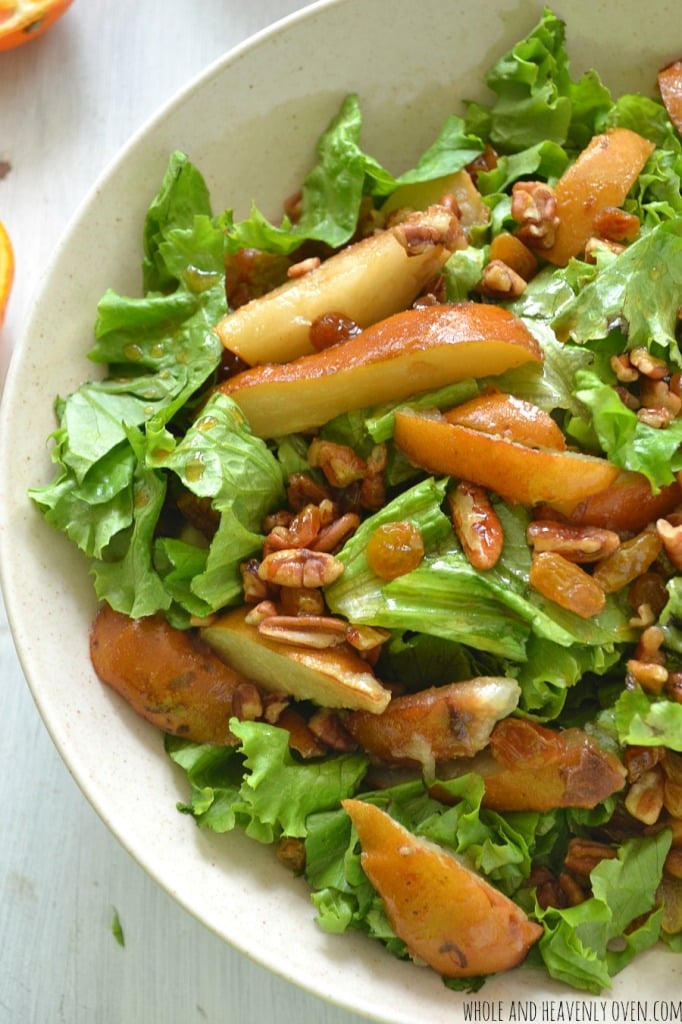 Drown it all in dressing. 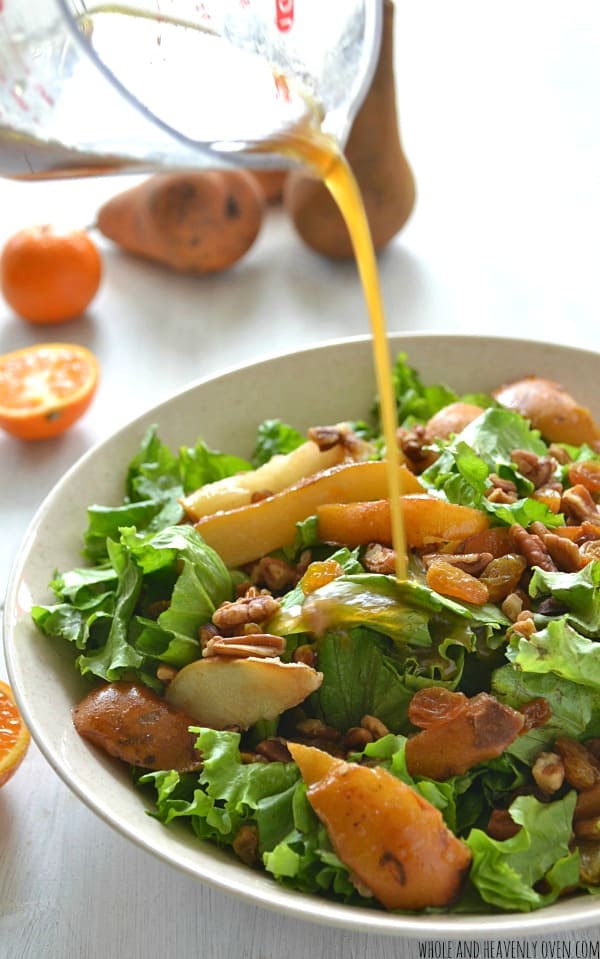 Okay, so my fam is the weirdest: Get a load of this:

My siblings for reasons that are totally unknown to me, cannot stand the golden raisins and pecans in this salad.

Fo’ real. I was washing the dishes and noticed that just about EVERY one of their plates still had those lusciously-crunchy and super-soft golden raisins sitting in a discarded pile.

I’m just like, SERIOUSLY, PEOPLE?! You are skipping the bestest part!

To be honest with you, sometimes I worry about their tastebuds….

But you and I aren’t weird like that are we? Good. Let’s just eat all the salad and forget about those picky people we all have in our life. 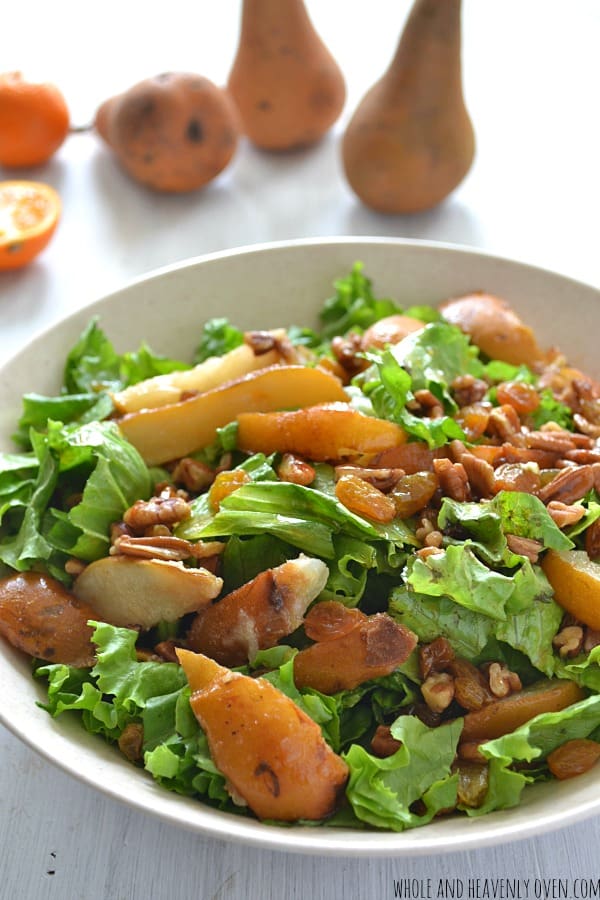 You know what YOU’RE having for dinner tonight. 😀 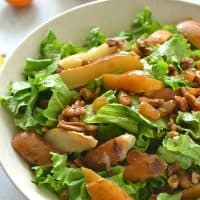