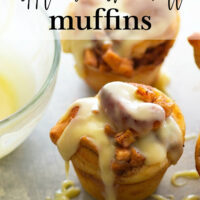 Fluffy cinnamon roll muffins are stuffed with a caramelized apple filling and glazed in a sweet white chocolate glaze for a dreamy fall breakfast!

Let’s do some pre-holiday baking with the last of those fall apples!

Just the casual breakfast of your dreams. These muffins are MORE than worthy to take on any holiday breakfast you may be planning in the next few months.

You can make the dough by hand in a bowl or use a mixer. I include instructions for both in the recipe at the end of the post.

Let the dough rise about 1 hour at room temperature. While the dough is rising, you can prepare the fillings.

For the apple filling, saute peeled + diced apple in a little butter with brown sugar and spices until just tender.

^^ both these components can be made hours in advance!

For filling the cinnamon rolls, roll your dough out into a 14×8 rectangle. Spread the cinnamon sugar butter + apple fillings to within 1 inch of edges.

Tightly roll up the cinnamon rolls and then use a sharp knife to cut into 1 inch rolls (you should end up with 12-15 even pieces) Place the rolls swirl side-up in muffin tins and let rise a second time until doubled in size, about 30 minutes.

We’re going to bake the rolls at 350F 20-25 minutes until a light golden brown. Let the rolls cool for a few minute while you prepare the glaze.

This glaze is the easiest ever! We’re going to heat a little cream + milk until steaming and then pour over white chocolate chips + vanilla. Whisk it around until the chips are melted and the glaze is smooth.

Pop your rolls out of the muffin tin and drizzle ’em with LOTS of glaze. Dive in face first.

These rolls DO have an overnight option! >>

These ROLLS! The texture is impeccably fluffy. Every bite is full of tender apples and sweet cinnamon sugar. There’s glaze filling every crack…

Plus, the convenience of the muffin pan? You can’t beat it. Clean up is easy and the rolls are perfectly personal-sized.

Basically everything you could ask of a holiday breakfast. Or a just because breakfast. Soooo this weekend’s breakfast plans??

More holiday worthy breakfast recipes you should definitely check out!! 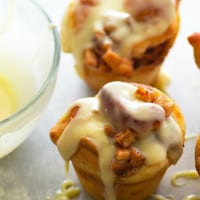