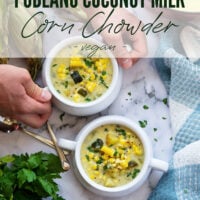 Charred sweet corn and poblano peppers add an incredible depth of flavor to this creamy coconut milk corn chowder. – easy to make a big batch of AND vegan!

I’m not usually on the whole soup-in-summer bandwagon, but for this corn chowder, I will make an exception.

This chowder is literally BRIMMING with all the best parts of summer! And if you’re swamped with sweet corn at the moment, this soup is going to lessen that load significantly.

You wouldn’t even be able to guess this gem of a soup is vegetarian + vegan-friendly. Pinky promise.

A big pot of this corn chowder is the move to make with all your summer corn! One batch uses a whopping 8 ears of corn, cause we don’t skimp on the sweet corn here!

I also show you a few simple tricks for getting the most flavor out of your corn. Keep reading for all the deets.

How to Prep Corn + Peppers

We are going to be charring the sweet corn and poblano peppers. It’s a simple step, but brings SO much flavor out of the corn and peppers and builds a hearty base for the chowder.

To char the corn and peppers, grill shucked corn and whole poblano peppers, turning occasionally until the veggies are slightly charred.

A few alternatives to grilling: you can char the corn + peppers in a cast iron skillet over medium heat. You can also broil the vegetables under high 5-8 minutes, flipping the veggies halfway through cooking.

Allow the corn and peppers to cool slightly, then use a paper towel to rub the skin and seeds off of peppers and cut into cubes. Then use a sharp knife to remove corn kernels from cobs. (save 4 of the cobs!)

What to Serve with Coconut Milk Corn Chowder

We recommend a few slices of warm crusty bread for serving alongside bowls of this corn chowder and for dipping.

If you’re not following a vegetarian or vegan diet, cooked crumbled bacon is delicious sprinkled on top of individual bowls if you want some meat!

Store corn chowder in refrigerator up to 6 days. For reheating, microwave individual bowls of soup or reheat larger quantities in a pot on the stove to 165F.

We’ve also had success freezing this soup up to 1 month. Thaw soup completely in refrigerator then reheat to 165F via microwave or stovetop.

There’s literally nothing not to absolutely adore about this soup, y’all. Summer in a BOWL!

The coconut milk makes it perfectly rich and creamy, the corn + poblanos are sweet and smoky, and it’s just brimming with all those classic corn chowder flavors ya gotta love.

Big batches only of this! Trust me.

More delicious soups to add to your menu! 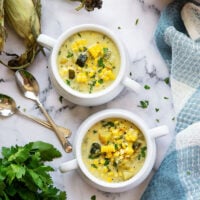