This cozy apple pie is so classic and simple, yet it tastes almost exactly like bakery-style apple pie! You won’t be able to resist it’s flaky lattice crust and the soft, caramel-y apple filling. Heaven! 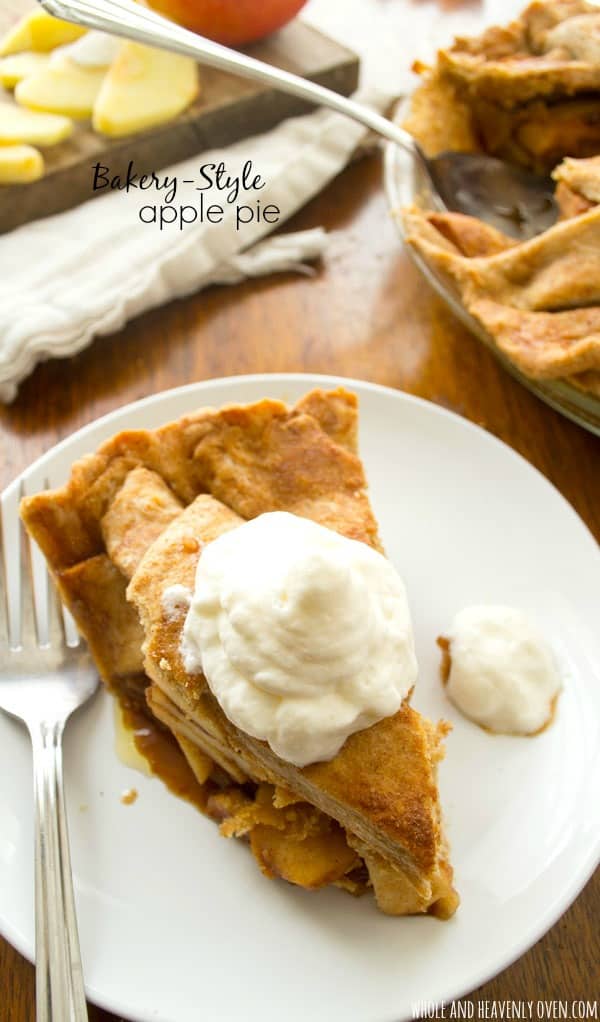 The past few weeks I’ve been getting you all psyched up for the holiday with pretty much the holy grail of Thanksgiving recipes. I’ve shared nearly all the old family traditional recipes, as well as few new favorites.

Oh, and these sweet potatoes yesterday, of course.

To say I’m stuffed, is an understatement. And it’s not even Thursday yet!! 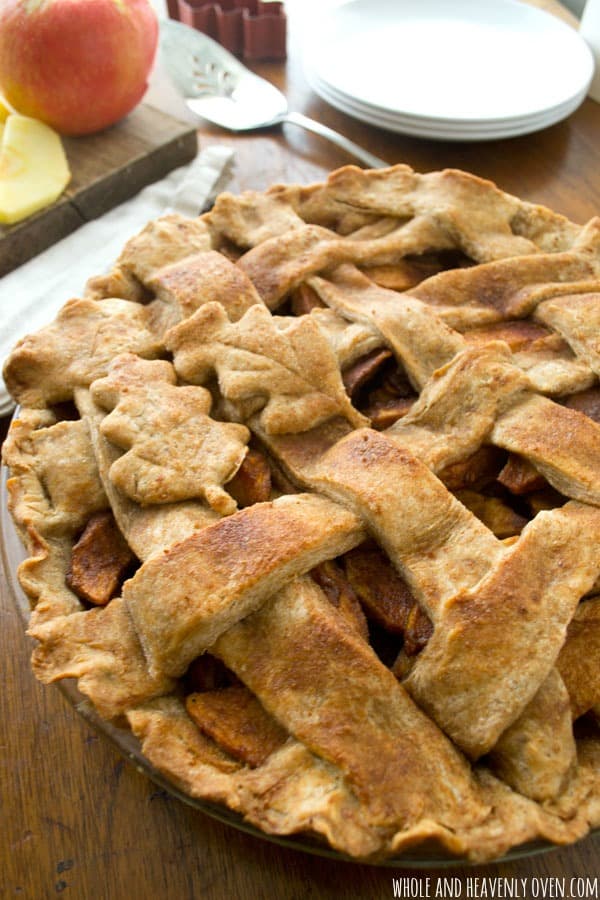 Today is the second-to-last Thanksgiving recipe I’ll be sharing with you guys this year. The last one is coming tomorrow and it’s preeeeeeetty special to me.

Apple pie comes in a close second-place though. Like THIS close.

I’ve been making this apple pie every year for Thanksgiving pretty much since the beginning of time. (my time anyway) In fact, I’m pretty sure there would be riots if I DIDN’T make this pie.

Because in the end, Thanksgiving is about family and being thankful. So I’m more than happy to oblige everyone with a huge slice of American apple pie with a jumbo-sized plop of whipped cream after the big feast. 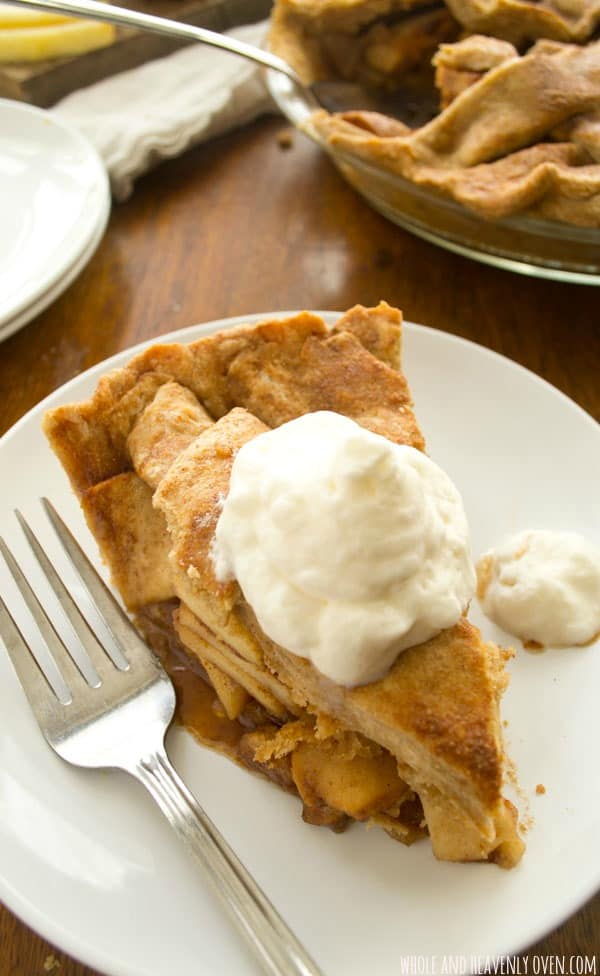 They’re all pretty thankful for apple pie. I am too, for that matter. 😀

I don’t mean to brag, but I’m kinda famous in this family for my apple pie.—I mean, the title says it all!! Just-like-the-bakery apple pie. 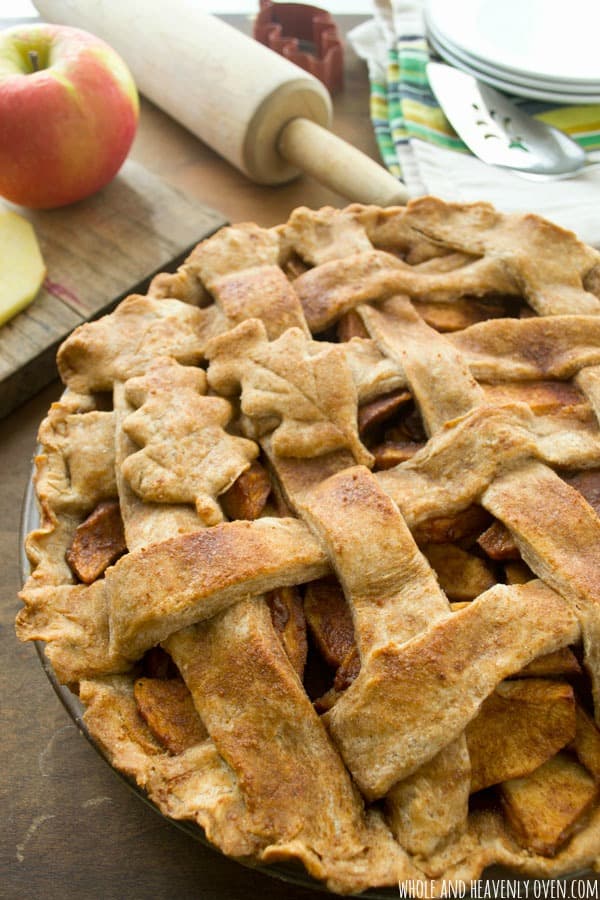 And it is high-darn time I shared the recipe with y’all. Just in case you haven’t figured out your dessert menu yet for Thursday.

Speaking of which, I just sat down to look over the last details for Thanksgiving dinner and you know what I realized? It turns out we are having 5 different kinds of pie for dessert.

No, I’m not kidding. I mean, I’ve been chipping away at making the pies the past few weeks and sticking them in the freezer and I guess I just never added all of them up or something?!

SO, this year we’re having pumpkin pie, pear pie, pecan pie, apple pie (obv) and my sister-in-law, Jessica is making two of her famed cherry pies.

Hoooooly cow, reading that back again sounds like an awful lot of pie. I’m gonna have to pull out my fat pants ‘fo real.

But too much pie?! No such thing. 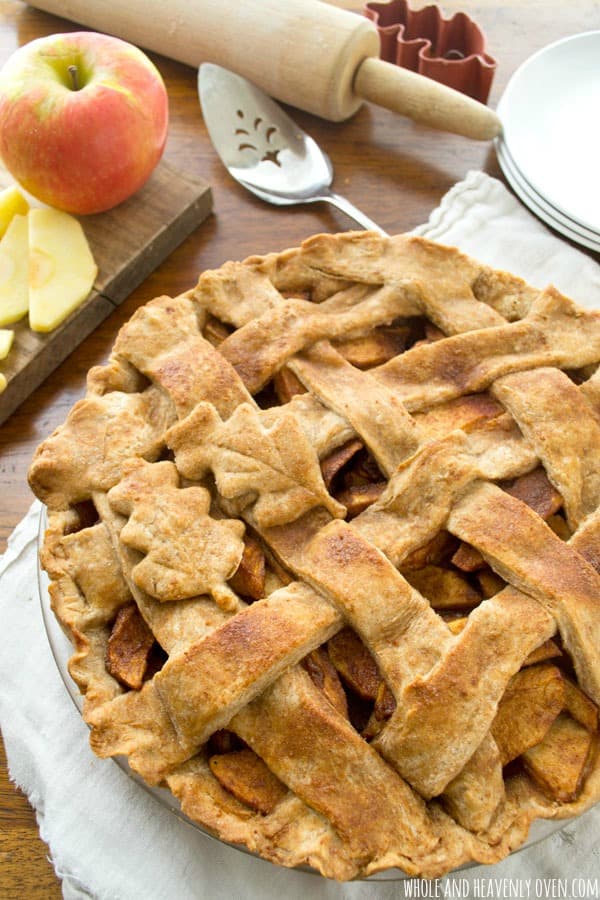 This is pretty much the only apple pie you’ll ever need in your life. It’s SO simple, but that’s part of what makes it so good! The lattice crust is super-flaky and buttery (and omg so pretty!!)….but the apple filling? BEST PART. The apples are literally melt-in-your-mouth tender, caramel-y, cinnamon-y, and YUMMY.

Yikes. I just say the Y word….Kinda a pet peeve of mine. I do NOT describe food as yummy. Too plain-jane and uncreative.

Sometimes you just don’t wanna mess with the classics. 😀 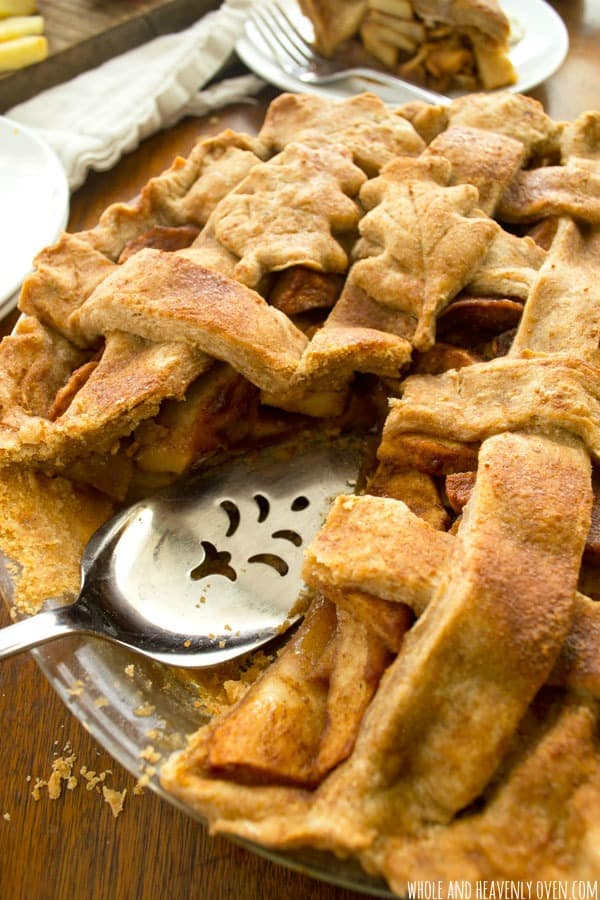 And I can I just say that it is SO worth the little extra effort?!

You can just go ahead and cancel that last-minute trip to the bakery to pick up the pie for T-day. Your own kitchen is now better than the bakery. 😀 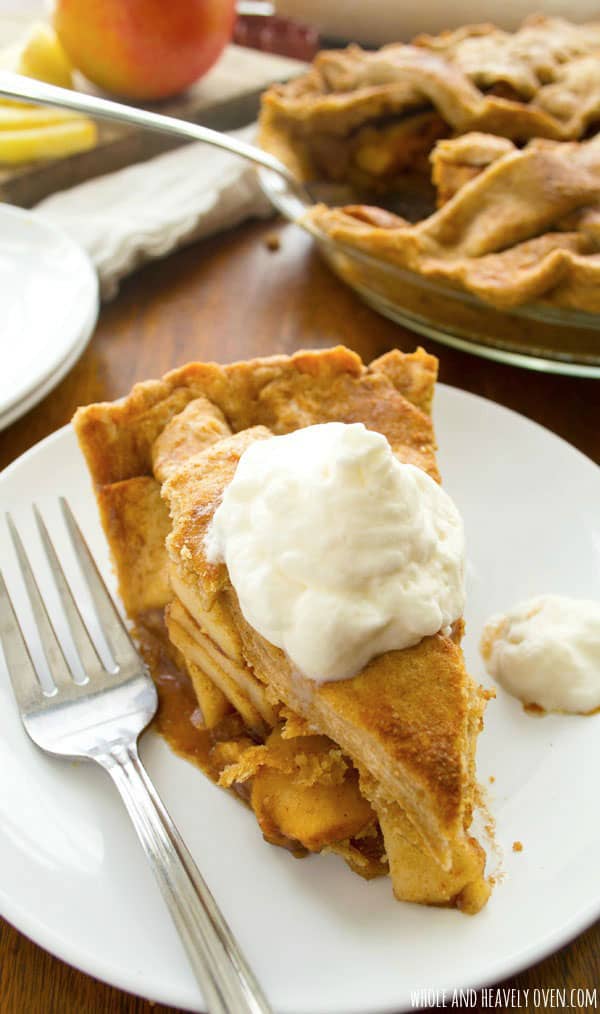 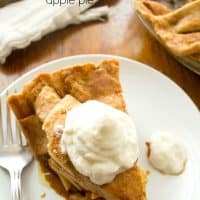 Store pie, covered at room temperature up to 4 days. (pie may also be frozen up to 1 month)
Tried this recipe?Leave a comment and rating below. Feel free to share a picture on Instagram and tag @wholeandheavenlyoven or hashtag it #wholeandheavenlyoven

Q: What’s your favorite kind of pie at Thanksgiving? Not even a contest for me. ↑↑