We love Indian food around here and we could honestly eat it every day if given the choice.

Making it healthier, vegetarian, and for a fraction of the price at home is also a pretty tempting offer though, gotta say.

Enter the vegetarian version of tikka masala. Mushroom-lovers, you’re gonna want to sit in on this one!

While there’s no debating how incredible classic chicken tikka masala is, this mushroom version is pretty much in a category of its own and it is GOOD.

Today, we basically just have the classic tikka masala sauce you know and love with the addition of earthy, hearty mushrooms.

(scroll down to the bottom of post for the full recipe)

Ingredients You Will Need

You won’t need any fancy, expensive mushrooms for this recipe. We recommend purchasing button or cremini mushrooms.

To prepare the mushrooms, rinse them well, remove the stems, and tear them into 1-in pieces. No need for a knife here, it’s easier to tear them with your hands!

How to Adjust Spice Level

This tikka masala is very easy to adjust based on your spice preference! —>

Mild tikka masala: skip the serrano pepper or use a milder pepper such as jalapeno.

Extra spicy tikka masala: use 3 serrano peppers and keep the seeds in or add more pepper to taste!

Make Ahead and Storing Instructions

This tikka masala is a dream to make ahead of time for easy dinners!

We recommend storing individual servings of tikka masala with rice in microwave-safe containers for easy heating + serving later. They will keep well in the fridge up to 6 days.

This tikka masala can also be frozen up to 1 month. Thaw completely in fridge then reheat to 165F on stovetop or in microwave.

Spicy, creamy, loaded with tender mushrooms…we’re just obsessed, y’all. This entire bowl is just a dream and there’s no missing the meat whatsoever!

Pro tip: make sure you have TONS of hot rice on the side for soaking up all that sauce!

Another pro tip, leftovers of this tikka masala absolutely rock, so make sure you stash them away accordingly.

If you love Indian dishes, you’ll love these similar recipes! 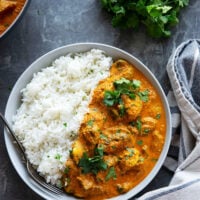